How bad is Zika in Rio?

The WHO says the Olympics will not spread the Zika virus 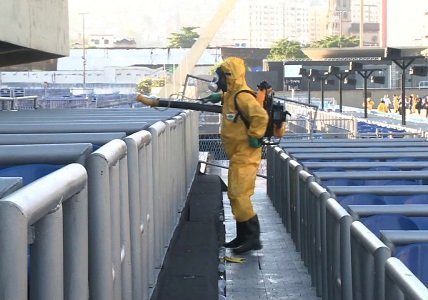 The Sambadrome is fumigated in Rio de Janeiro, Brazil, in an effort to stop the spread of the mosquito-borne Zika virus. (Photo: CNN)

RIO DE JANEIRO (CNN) — So it's final: the World Health Organization has confirmed that the 2016 Olympics do not need to be postponed or moved from Rio because there is a "very low risk" that the Games will further spread the Zika virus.

This is great news for athletes and potential visitors to the first South American Olympic Games, although the reality for residents is more nuanced, given the huge spike in Zika infections at the beginning of the year.

Olympics organizers and Brazilian officials have gone on the offensive over the past week to try to quell fears over the mosquito-borne disease, arguing that the Summer Games will take place in August, Brazil's winter, when the mosquitoes tend to die off.

"According to a study done by the University of Cambridge, of the 500,000 foreign tourists who will come, only one will get the Zika virus, so it's almost a zero risk," Brazilian Health Minister Ricardo Barros said last week.

Claudia Codeco, a biologist studying mosquito-borne infections at Rio's Oswaldo Cruz Foundation, said her research suggested similar findings. "Zika is not a local problem anymore. This is not a problem of Rio de Janeiro or Brazil. This is already present in 60 countries," she said. "So maybe at this time of the year, we should be paying more attention and giving advice to tourists that are going to the places where summer is beginning now."

The chief medical expert for the 2016 Olympics, Joao Grangeiro, also tried to minimize risks during a news conference with foreign media. He compared the current outbreak of Zika to dengue fever, a chronic problem in Brazil spread by the same kind of mosquito. He pointed to a study that concluded that only three foreign visitors out of 600,000 were infected with dengue during the 2014 World Cup in Brazil.

The Zika virus was first detected in Brazil last year, concentrated in the northeast of the country. Doctors later determined that it caused a huge spike in birth defects, especially microcephaly, a birth defect in which the baby's head and brain do not develop properly. The Ministry of Health has confirmed 1,581 cases, and 3,047 cases are still being investigated.

The virus didn't really take hold in Rio de Janeiro until this year, but it has since become one of the hardest-hit cities. There have been more than 26,000 cases of the virus in 2016, sparking anxiety among pregnant women and their families.

The peak came in February, when Rio was hosting a million revelers in its outdoor Carnival festivities. A total of 7,232 Zika cases were registered, and many experts believe that if any event were going to further the international spread of Zika, would have been Carnival.

Zika cases have actually declined sharply in recent weeks as the temperatures cool. Only 702 cases were confirmed in Rio in May.

But for Lais Cristielle, the shrinking numbers bring little relief. She is six months pregnant, and although she doesn't think she had Zika, she also knows that in up to 80% of cases, the virus is asymptomatic.

"Every month we go and do an ultrasound, and it terrifies me that they will tell me my baby isn't developing or the baby's head isn't growing," she said.

Cristielle lives in the Vidigal favela, an increasingly popular tourist destination, with multiple hostels and even a boutique hotel overlooking Rio's white-sand beaches. She says many of her friends and neighbors did get Zika and points to a cement canal that runs right in front of her house.

"This is sewage, dirty water, and there are mosquito larvae there," she said. That means she closes herself inside her house until she has to go to work, and then she puts on long sleeves and lathers on the repellant.

"There have been cases of pregnant women who didn't know they'd had Zika and their babies were born with microcephaly. Just talking about it gives me the shivers," she said.

For residents in Rio, the fear is not only that the outbreak in the summer months will lead to a surge in birth defects but that when the Games are over and visitors are gone, they'll have to brace for another mosquito season.