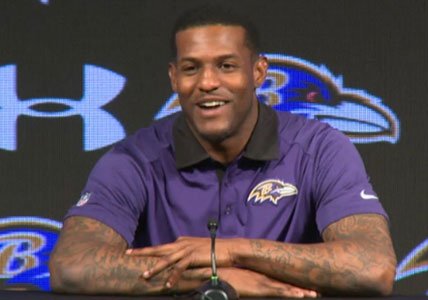 Ravens wide receiver Mike Wallace reacts to a question during his introductory press conference at the Under Armour Performance Center in Owings Mills, Md. (Courtesy Photo/NFL.com)

The Baltimore Ravens have struggled to find a wide receiver that can stretch the field the way Torrey Smith did before signing a free agent deal with the San Francisco 49ers last year. The team used a first round pick for Breshad Perriman and traded for Chris Givens also.

Givens has since moved on to the Philadelphia Eagles while Perriman has been struck with the injury bug once again. The Ravens are hoping free agent acquisition Mike Wallace can return to his days as a deep threat.

Wallace was once a member of the Pittsburgh Steelers and saw his best days stretching the field when Ben Roethlisberger was throwing him the ball. Joe Flacco has similar deep ball accuracy, which should help Wallace.

The speedy receiver is excited about his opportunity in Baltimore.

“It [has] been great. Great guys around here, great coaches— a lot of energy,” Wallace said. “I think I’m picking up things pretty well. I’ve got most of the playbook in so far, so I think I’ve been doing a pretty good job. I’ve got to clean some things up but I like where I’m at.”

Wallace views his time with the Ravens as a fresh start. He feels the team will give him a chance to do the things that he specializes in.

“We have the team, we have the play-calling to do it here— more of an aggressive play-calling style,” Wallace said. “That’s why I chose to come here, because I felt like it gave me the best opportunity to make big plays like I want to do.”

Now entering his eighth season, Wallace is considered to have lost a step. He acknowledged that he is not as fast as he once was but he remains one of the fastest players in the NFL.

“[I am] very pleased to have Mike with us. He’s done a great job,” Harbaugh said. “He worked really hard the whole off season. He’s very smart, he learns the offense quickly, and you can do anything with him. He goes deep, he comes across, he runs routes [and] has good hands. I think he’s just done a tremendous job as an all-around receiver, and I he’s going to be a big part of what we’re doing this year.”

Wallace is playing for his fourth NFL team. He has gained a lot from competing against his different teammates along the way. His intention is to show that he can still stretch the field and be a legitimate weapon in the passing game.

“I went from playing against Ike Taylor and William Gay, to Brent Grimes, to Xavier Rhodes, Terence Newman, and guys who are smarter, bigger, stronger. I went against small, tall, big, fast, strong— all types of different guys,” Wallace said. “Playing against some great guys coming through these last three or four years, I think I’ve gotten better, even though numbers don’t say so. I’ll show some people I have a lot up my sleeve, and I think I have the opportunity here on this team, have great coaches to put us in position, and great quarterbacks.”