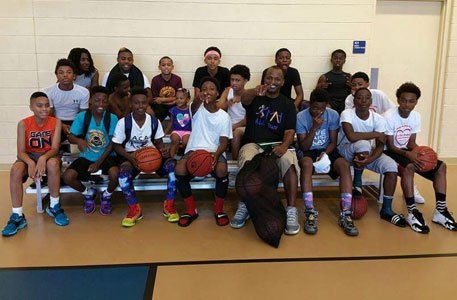 The Wiley H. Bates Legacy Center Summer Leadership and Basketball League will provide an option to keep boys and girls ages eight to 16 active this summer. Activities run from June 18 to August 6, 2016 at the Roger Pip Moyer Recreation Center, located at 273 Hilltop Lane in Annapolis. The basketball league has expanded this year to include four leagues for boys and two for girls, leadership skills, reading and the arts. (Courtesy photo)

When schools close for the summer, parents often search for activities to keep their children occupied. This year, Men Aiming Higher (MAH) and the Annapolis Arts, Sports and Leadership Academy (AASaLA) will host The Wiley H. Bates Legacy Center Summer Leadership and Basketball League to provide an option for boys and girls, ages eight to 16.

Summer activities will run from June 18 to August 6, 2016 at the Roger Pip Moyer Recreation Center, located at 273 Hilltop Lane in Annapolis.

The basketball league has expanded this year to include four leagues for boys and two for girls, as well as leadership skills, reading and the arts.

MAH is a Prince George’s County based nonprofit founded by Delgate Darryl Barnes. The organization supports the development of young men and now has an Annapolis chapter.

While highlighting the leadership academy’s enhancements, Darius A. Stanton, AASala board chair, said that mental health resources will be provided by the Anne Arundel County Community Action Agency, Inc.’s Youth Services Bureau and a new Parent University will teach parents financial literacy, how to start a business and child advocacy. While youth participate in leadership sessions, parents will be encouraged to participate in sessions at the Parent University.

“We want to start to introduce a model where parents are fully engaged with their children, and if children and parents are learning together, and when they go home, they’re practicing what they learned” Stanton said.

Youth who are interested in ACT-SO, the NAACP’s Afro-Academic, Cultural, Technological and Scientific Olympics for African-American high school students may begin to prepare for the next competition, where they will compete against children from all over the nation.

William Rowel, who was a national winner for ACT-SO’s drama category, is scheduled to lead ACT-SO. Rhonda May Winfrey, founder of Expressions Dance Company, will teach dance; and Comacell Brown Jr., an award-wining professional artist will teach art.

“The faculty of this academy, although volunteering their time are professionals in their craft,” Stanton said.

The recent graduate from Duke University with a master’s degree in Environmental Management will serve as the AASaLA chair of communications and public relations committee, and support the environmental education program. The Rough is his clothing line and will co-sponsor AASaLA.

“As someone who has been fortunate enough to gain experiences across the country and across the globe, I have learned that exposure is the best teacher. I have become a leader due to being exposed to so many different opportunities that have shaped me to be a very well-rounded scholar, activist, scientist and environmentalist,” said Darius A. Stanton II. “To me, it would only be right for me to return to grounds where I started my journey as a leader, to inspire and spark the minds of the future leaders from Annapolis, Maryland.”

Darius A. Stanton added that the Fathers for Domestic Peace Movement will incorporate messages that promote the benefits of having peaceful homes, in light of a surge of domestic violence incidents.

“As a crime fighter, I recognize that the really long-term change for crime starts with kids, and having them reorient their perspective as to right and wrong, staying on the right path, staying in school and stuff like that,” said Adams, who plans to attend the kick off event on June 18, 2016.

The cost to participate in the basketball league and leadership academy is $35 for individuals and $300 per sports team. The registration deadline is June 25, 2016. To register online, visit: www.GoGreenwithMenAimingHigher.org or you may register at the Anne Arundel Community Action Agency, Inc. office located at 251 West Street in Annapolis.