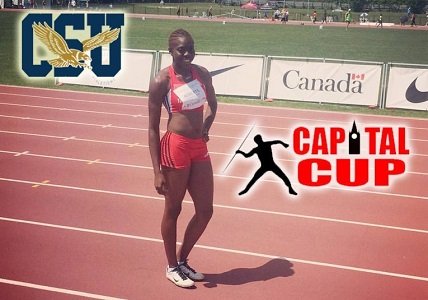 The freshman multi-athlete set a pair of personal best records while placing first overall in the women's heptathlon. Roberts finished with 4,841 total points breaking her national junior record in the heptathlon including strong outings in both the shot put and 200 meter dash events.

Roberts, a biology major at Coppin State, measured in with a personal best throw in the shot put competition at 11.34 meters and ran a personal top-time of 24.95 in the 200 meter dash. "I was thrilled about finally achieving a personal record," Roberts stated. "As a part of the Trinidadian squad, we all came out last weekend focused and ready to conquer our goals. We came out and got some good results as a whole."

Next, Roberts will compete at the Trinidad Senior Nationals for an opportunity to represent her country in the 2016 Rio Olympics.