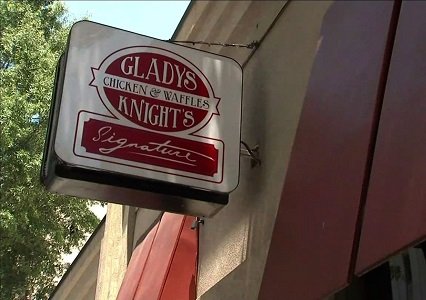 Gladys Knight's Chicken and Waffles, an Atlanta dining institution that features Southern favorites and is named after the famed singer, was raided on Tuesday after Georgia's Department of Revenue accused the owner -- Knight's son -- of theft and tax evasion. (CNN)

Gladys Knight's Chicken and Waffles, an Atlanta dining institution that features Southern favorites and is named after the famed singer, was raided on Tuesday after Georgia's Department of Revenue accused the owner -- Knight's son -- of theft and tax evasion.

Shanga Hankerson, Knight's son and the owner of the three Atlanta-area restaurants, "is accused of stealing over $650,000" in sales taxes and withholding taxes owed to the state, the agency said in a news release.

"After penalties and interest the total exceeds $1 million," the department said.

"The department further alleges that Hankerson used these funds for personal use."

Department of Revenue agents executed search warrants at the three restaurant locations and a corporate office in Riverdale, Georgia, and "unsuccessfully attempted to serve arrest warrants on Shanga Hankerson ... at his home," the agency statement said.

Hankerson was in Fort Lauderdale, Florida, on Tuesday as authorities negotiated terms of his surrender to Georgia authorities, according to the agency's special investigation director, Josh Waites.

CNN called the office of Hankerson's Atlanta tax attorney, Josie Walton-Harris. A receptionist issued a statement of "no comment."

"We are working with Mr. Hankerson's attorney to have the business up and running again as soon as possible. As soon as a receivership agreement is reached between the state and Hankerson, the restaurant should reopen for business," Waites said.

The restaurant's corporate phone line was disconnected. An email inquiry sent to Hankerson received no response.

This is not the first time Hankerson has been in hot water over taxes, agency spokesman William Gaston told CNN.

"He has been in over two dozen payment plans and has defaulted on all of them. It extends to 2013. They have all been for sales and withholding tax," Gaston said.

Knight, a seven-time Grammy winner, is not suspected of any criminal activity in the case against her son.

A statement from her public relations agency sent to CNN read, "Gladys Knight lent her name to her son's restaurants in the Atlanta area, similar to a celebrity endorsement. Ms. Knight was not involved in any way with the operation of the restaurants and she is sure that her son and his business partners will rectify the situation. As always, her main concern is for her family's well-being and she is making sure the family has the guidance they need to assess the situation and move forward."

Gladys Knight's Chicken and Waffles opened in Atlanta in 1997 and has expanded to three locations.

In February, the downtown location failed its health inspection after it received a 56 total score. A followup review raised the score to 90.

Both Knight and Hankerson discussed the health inspection with CNN affiliate WSB earlier this month. Knight visited the restaurant while she was in town performing at a concert.

Knight told WSB her son called her immediately after the failed inspection and said she was confident in his ability to run the restaurant.

"I'm not trying to get a whooping at home," Hankerson said, speaking of the restaurant health rating.

"About the people that walk through the doors. I'm just as concerned about them as them buying tickets to come my concerts," Knight told WSB. "I want to give them the best of who I am."