Researchers hope to go beyond wigs with 3-D printed hair 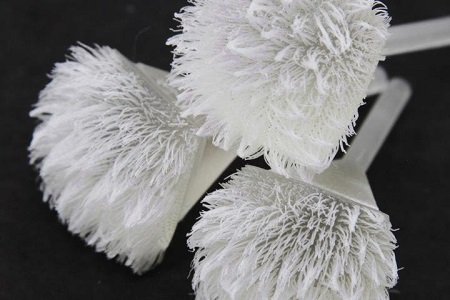 "The potential applications in and out of medicine are wide," one doctor says of 3-D printed hair. (Tangible Media Group/MIT Media Lab)

Any number of complicated things can be created in a matter of minutes with 3-D printer technology: weapons, robots, even pizza. But what if you could print hair?

The technology required to print hair, fur and other fine features is quite complex, but one group of researchers has developed a way to create thousands of hair-like structures in a few minutes.

Inspired by hair-like structures found on animals and plants, researchers in the Massachusetts Institute of Technology's Media Lab explored ways to re-create these patterns while minimizing the exceptional amount of design time that's typically required. The usual process is time-consuming, not because of the hardware, but rather, the software.

That's what led the team to develop a new platform called Cilllia, which allowed them to do in minutes what used to take hours.

Their work is detailed in a paper (PDF) presented last month at the Association for Computing Machinery's CHI Conference on Human Factors in Computing Systems.

Cilllia allows users to create figures with detailed surface texture such as coarse bristles, paintbrushes with customizable widths and jewelry that has a soft touch.

But, what about creating hair extensions and wigs?

Although the micro-pillar structures are not intended for use in wigs, the researchers note that it may be possible. But that is not their end goal.

"When people hear about 3-D printing hair, the first thing they think about is definitely hair extensions, but the purpose of this project is looking beyond the aesthetic perspective," said MIT graduate student Jifei Ou, the lead author of the paper. "What kind of new functionality can we bring to the material?"

They created printed arrays that act as Velcro-like bristle pads. They also printed a small furry rabbit figure that sensed strokes, indicated by LEDs that lit up. They even created hair with the ability to move objects utilizing a vibration technique.

"I think their model is very exciting. Especially the part about sensing cilia. The potential applications in and out of medicine are wide," said Dr. Melissa Piliang, a dermatologist at the Cleveland Clinic, who was not involved in the research.

Some potential applications could include using these new hairs to sense movements of air or fluid, which is essential to many of our bodily functions.

The hair being replicated is synthetic and has nothing to do with real hair, noted Dr. George Cotsarelis. "I was hoping to hear that this research would have an impact on developing cell-based treatments for hair loss," said Cotsarelis, chairman of dermatology at the University of Pennsylvania's Perelman School of Medicine, who was not involved in the research.

Ou and his team are looking to further explore 3-D printing. They want to make the system more stable and are hoping to open-source the program they're designing. "We are also looking for more functions that hair structure can provide. For example, thermal protection," Ou explained.

From the beginning, the team was seeking a way to test technology's limits and found hair to be the perfect subject. They ditched the time-consuming conventional computer-aided design software and relied on their own program.

Their software allowed them to develop prints on both flat and curved surfaces and gave them the ability to change varying aspects of the hair's dimensions, such as its height, angle and width. The team used Photoshop to change these dimensions and developed an algorithm for translation, which they fed to a 3-D printer.