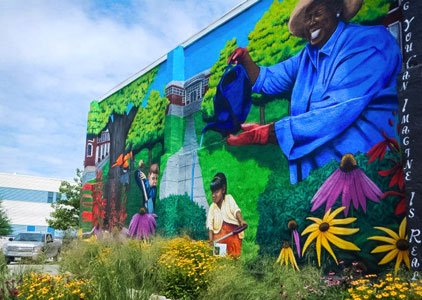 The Baltimore Community Foundation, the local philanthropic organization whose mission is to inspire donors to achieve their charitable goals from generation to generation and to improve the quality of life in the region through grant making, civic leadership and strategic investments, has announced that it has raised nearly $104 million in three years.

In a news release, foundation officials said they’re celebrating the most successful fundraising in the organization’s 44-year history.

The Campaign for BCF and Baltimore, a three-year effort, has raised $103.7 million, generating more than $30 million to support immediate needs and almost $70 million in endowment for long term goals.

“BCF set a bold goal to raise $100 million during this campaign,” said Laura Gamble, the co-chair of the Campaign and chair of BCF's board of trustees. “This was a huge undertaking for us, but we knew it would pay untold dividends both in the immediate impact it would have in Baltimore and in ensuring that BCF would be able to continue its great work for years to come.”

Wes Moore served as campaign co-chair with Gamble while George Bunting, Eddie Brown and Suzanne Cohen served as the honorary chairs and Ray Bank served as board of trustees’ chair for most of the campaign. Their leadership and outreach was instrumental to the success of the campaign, officials said in a news release.

“What we set out to do was to raise one hundred million dollars for Baltimore,” Moore said. “It really says something that Baltimore trusted BCF with that gift.”

The campaign’s 250 major donors represent a diverse cross section of individual Baltimoreans, business owners, private foundations, and many others who care deeply about the future of our city, foundation officials said. Major gifts ranged from $10,000 to $16 million.

Twenty-eight donors pledged gifts of $1 million or more, which will be used to support grants and endowment. Some gifts are already being used for immediate needs in BCF's priority areas— neighborhoods and education.

Other gifts will help build permanent endowments to strengthen BCF and ensure its ability to respond to Baltimore's evolving needs today and in the future, organization officials said.

“All of this generosity is driven by BCF’s vision that Baltimore boasts a growing economy where all have the opportunity to thrive,” said Tom Wilcox, BCF president and CEO. “Because of the campaign’s success, we now can dare – not just to dream – but to assert that this community foundation can achieve what Baltimore deserves.”

“Our goal is to have a 90 percent readiness for children entering kindergarten by 2017,” Wilcox told the Baltimore Business Journal. “Our belief in our schools is fundamental to our future.”

The BCF has provided services to more than 1,000 children across Baltimore City Public Schools, said Perry Gorgen, the director of early learning for BCPS. “It’s something that we really appreciate,” he said.

Although BCF invests in neighborhoods across Baltimore, he said the organization has particularly focused on Reservoir Hill and Greater Highlandtown, which were centers of unrest during the riots last year following the death of Freddie Gray.

Earlier this year, the BCF distributed $750,000 from a separate post-riot fund, but Wilcox said the riots certainly played a role in helping the organization reach its $100 million goal.

“We had raised less than $70 million at the time of the riots,” Wilcox said. “That part, the last $30-35 million, is definitely harder than the first $35 million but we were heartened by the support that we saw.”