Discover the unexpected: NNPA journalism scholars are breaking the news 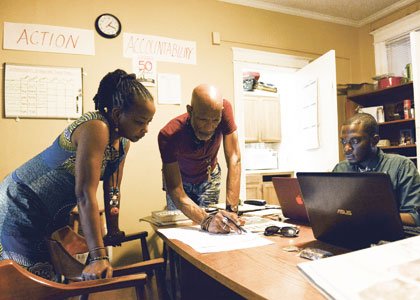 (NNPA) — Today people are exposed to 10-minute news segments six times per hour in a 24-hour news cycle in terms of television and radio news. Twitter, Facebook and other social media are now used for instantaneous news, commentary, and the sharing of perspectives by hundreds of millions of people throughout the world.

Yet, Black-owned newspapers in the United States remain in high demand even amidst the growing digital age of communications and multimedia news services. Social media compliments and extends the reach of the Black Press.

On the ground and in the streets, these gifted and talented young journalists are helping not only to bridge generations concerning vital news coverage, but also the NNPA Fellows are using multiple media platforms to help reach new readers across the nation and global community. As more young readers are now consuming their news, sports coverage, and cultural aspiration via the Black Press, then the future sustainability of Black-owned newspapers is further assured.

The point here is that the print Black Press in America is content rich and therefore is invaluable in today’s context of national and international content distribution. There is a substantive difference between sensationalism to get media attention and good journalism that renders objective facts or that delineates informed opinions.

For more than 189 years the Black Press in America has represented the best in presenting the facts, news, struggles and triumphs of African American life and empowerment. The baton is now being pass to a generation of journalists and publishers who are equally fearless, courageous, and articulate.

We are proud of the opportunity and the engagement that the DTU is offering to the NNPA family and community of publishers and media owners throughout the nation. Already some of our NNPA Fellows’ news entries have made the front pages of our newspapers. In addition the published stories by the NNPA Fellows have significantly increased the NNPA’s media impressions via social media.

It should be noted here that President Barack Obama on the occasion of the White House observance of the 2016 Juneteenth Celebration commented on the importance of continuing the struggle against all the lingering vestiges of slavery, racism, injustice, and inequality. The Black Press is today the most capable and responsible vehicle to continue to strive toward fulfilling the goal of racial, social and economic equality.

President Obama stated, “Juneteenth is a time to recommit ourselves to the work that remains undone. We remember that even in the darkest hours, there is cause to hope for tomorrow’s light. Today, no matter our race, religion, gender, or sexual orientation, we recommit ourselves to working to free modern-day slaves around the world and to honoring in our own time the efforts of those who fought so hard to steer our country truer to our highest ideals.”

Learn more about Discover The Unexpected (DTU) at http://www.nnpa.org/dtu/ and use the hashtag #DiscoverTheUnexpected on Twitter @BlackPressUSA and @NNPA_BlackPress