New exhibit focuses on being Black in White America 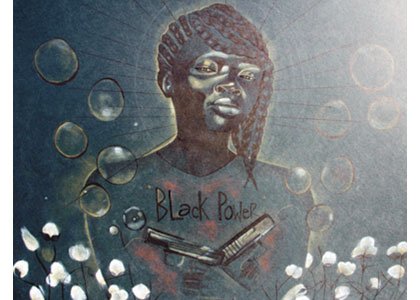 A new exhibit at the Galerie Myrtis Fine Art Gallery explores the politicization of Black identity in the United States.

From legalized slavery to the most recent quips with racial-overtones by presumptive Republican presidential nominee Donald Trump, a minority of Americans have been desperately and diligently fighting against a White power structure for equality throughout the nation’s relatively short history, gallery officials said in a news release. 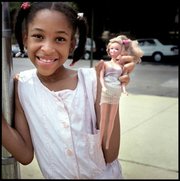 The exhibit, “To Be Black in White America,” began simply, said Aden Weisel, the gallery director and curator for the display. “One of the artists that we represent, Larry Cook, became a semifinalist – and now he’s a finalist – for the 11th annual Janet & Walter Sondheim Artscape Prize. We decided that Cook’s work should be the starting point for our summer exhibition, which coincides with Artscape,” Weisel said. “Cook focuses on race, politics and history. I chose the other artists that round out the dozen in the show based on how they complemented, explored, focused or broadened those themes,” he said.

Noting that social media is full of users asking if the country is back in the 1950s or 1960s, Weisel said the truth is that the country has never left the Civil Rights era completely in the past. Institutional racism and personal vitriol have always been present he said, adding that they crop up when vile words provoke violence or when an act of violence incites protests.

While the subject matter surrounding White power structures is as vast as the Middle Crossing, the artists featured in the exhibit are able to identify and clearly express difficult but highly-specific aspects of the struggle, he said.

“Cook’s featured videos at Galerie Myrtis question the progress made for and by African-Americans since Dr. Martin Luther King Jr.’s ‘I Have a Dream’ speech,” Weisel said. “This established a link between history and today that allowed a flexible chronology for the other artists to explore the politics of being Black in the United States.”

In the back gallery, artists tend toward history including Susan Goldman’s series of prints of Saartjie Baartman the “Hottentot Venus” which induces the viewer to think both about the history of “human zoos” and the contemporary exploitation of Black female bodies. The woman in Jamea Richmond-Edwards’ drawing “Guns, Bubbles and Black Power” evokes the principles, pride and community care of the Black Panthers, Weisel further noted.

Meanwhile, the front gallery features work with more contemporary themes and images. Stephen Towns painting “I Wish It Were That Easy,” is about African-Americans having the right to vote but the difficulties of being able to exercise that right and have one’s vote counted.

Also, Wesley Clark’s series of small targets, “Open Season @103,” follows his research and documentation of African-Americans killed by police and civilian authorities since the murder of Trayvon Martin.

Many of the targets are brightly colored to evoke the person and their spirit that have been lost. However, this gallery strays from the morbid to focus on family and community.

“This exhibit is extremely important and timely,” Weisel said. “The history of the United States has been White history since before this country was formed and formalized. This is generally true of world history, but I’m narrowing the subject.”

The show’s earliest historical reference is Oletha DeVane’s installation titled “Henry Box Brown,” named for the man who escaped from slavery in antebellum Virginia by mailing himself to abolitionists in the free state of Pennsylvania.

“The issues that these artists focus on are about identity, personal safety, family, community, school, police, prison, government and, unfortunately, violence and death,” Weisel said.

“The issues confronted in ‘To Be Black in White America’ demand answers not hopes and prayers. Some people take to the streets to confront these issues, but artists take to their studios,” he said.

“What you see at Galerie Myrtis is the processing of events past, the expression of frustration with the way things are and a search for answers.”

The exhibit runs from June 25 to July 30. It will include some extended hours and artists’ talks.