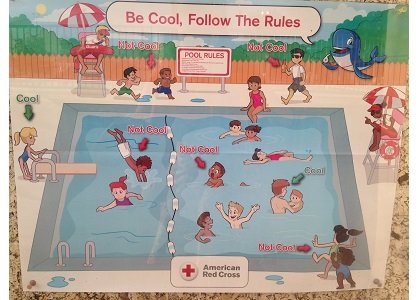 The Red Cross apologized for this pool safety poster, deemed racist by some. (Credit: From American Red Cross)

(CNN) — The Red Cross is apologizing after a poster depicting pool safety rules was circulated on Twitter and flamed for being "super racist."

The poster, which shows a crowd of cartoon children committing an array of poolside do's and dont's, was spotted at the Salida Pool and Recreation Department in Salida, Colorado.

A Twitter user put a picture of the poster online, where people debated whether it was, in fact, offensive or not.

Those who found the poster questionable said it showed children of color doing dangerous activities labeled as "Not Cool," while all of the acceptable, "Cool" activities were depicted with lighter-skinned people.

Though there were those that thought the interpretation was a bit of an overreach, the Red Cross swiftly apologized, replying to the original tweet and later issuing a statement.

"We deeply apologize for any misunderstanding, as it was absolutely not our intent to offend anyone. As one of the nation's oldest and largest humanitarian organizations, we are committed to diversity and inclusion in all that we do, every day," it wrote on its website.

The organization also said it has removed the image from its website and app, and has requested the poster be removed from aquatic facilities. The Salida Rec Center also tweeted that it had removed the poster and "didn't scrutinize it like we should have."

The poster was originally part of the Red Cross' 2014 "Aquatics Centennial Campaign."

"We are focusing on areas with higher-than-average drowning rates and participants who otherwise wouldn't have the opportunity to take swim lessons," the Red Cross wrote.