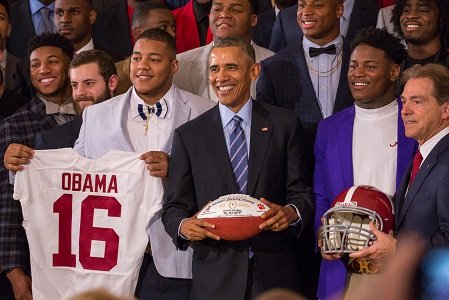 WASHINGTON (HUNS) — During the annual celebration of the college national football champion at the White House, President Barack Obama joked Wednesday that he obviously is the reason for the continued and dramatic success of the University of Alabama, the winners of the 2016 college football championship, their fourth in seven years.

“Now my first question is, ‘Coach what took you so long?’” Obama said. “It’s been three whole years since I last saw you. This is the fourth time I have hosted Alabama here at the White House. So clearly, I have brought you some good luck. In fact, you could call me ‘O-BAMA.’”

Obama also commended the team for its skill and called coach Nick Saban “somebody who’s in the running to be the greatest football coach of all time.”

Saban said he is still appreciative of the experience of winning championships and of visiting the White House.

“It never gets old,” he said. “This is a wonderful experience. Not a lot of our players get to experience the District of Columbia, Washington, D.C., the Washington Monument, and the Lincoln Memorial. I think it’s something our players all look forward to.”

“This team is special in the fact that…I use the term ‘We won as one,’ everybody sort of holding each other accountable,” he said. “The leadership we had on the team, the adversity we faced losing early…to winning the championship against the very good Clemson team, I think, makes this team really unique from all the rest.”

The team presented Obama with a jersey and helmet emblazoned with the number 16, representing the number of national championships the team claims to have won. Officially, the team is recognized by the NCAA as having won 13.

The audience was filled with the family and friends of the players as well as the governor of Alabama, Robert Bentley, and some members of the Alabama delegation in Congress.