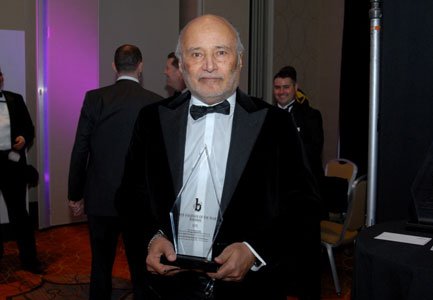 Baltimore attorney Billy Murphy received the "Birth of a Legacy" award at the 30th Annual Black Engineer Conference in Philadelphia. Murphy earned a Bachelor degree in Electrical Engineering from the Massachusetts Institute of Technology in 1965. (Photo: Gar Roberts)

To some, it may be surprising to learn that one of the best-known lawyers in the country, Baltimore’s Billy Murphy, received the Birth of a Legacy Award at the 2016 Black Engineer Conference in Philadelphia.

However, Murphy’s award can be traced even further back before his other countless honors that included making Baltimore Magazine’s list of the 25 Smartest People in Baltimore.

“I’ve worked in engineering, that’s where my start was,” said Murphy, who represents the family of Freddie Gray and whose courtroom prowess once led Judge Howard Chasanow, formerly of the Court of Appeals of Maryland, to proclaim “juries are just spellbound by Billy Murphy.”

After a pioneering career as an undergraduate engineering student at the Massachusetts Institute of Technology and early jobs in the aerospace industry, Murphy decided to follow in the footsteps of his father, William H. Murphy, Sr., who was one of the first African-American judges to preside in the state of Maryland.

The elder Murphy was a staunch civil rights supporter and a test case for integration at the University of Maryland Law School, his son said.

“Even as the son of a judge, segregation was an up-close and personal thing for me,” said Murphy, who heads the Baltimore firm, Murphy, Falcon & Murphy.

“The injustices that my father experienced as a young man were formative, inspiring him to undertake a lifelong fight for the rights of underrepresented communities,” Murphy said, noting that’s in large part why he became a lawyer.

Murphy’s crusade for justice on behalf of the underprivileged has now spread to Flint, Michigan where he’s filed a federal class action lawsuit alleging a pattern of behavior by Michigan Governor Rick Snyder, the mayor and other officials whom Murphy said violated the Constitutional rights of those who are forced to pay for clean water but have never received it.

“The governor has to be held accountable,” Murphy said.

As noted in a recent profile of Murphy, the 72-year-old has been the lawyer to call for more than 45 years.

The longtime criminal defense attorney is respected and feared as a litigator and he’s been able to secure multimillion-dollar settlements in police brutality and racial discrimination cases.

After ten years of building a thriving practice, he successfully ran for judge of the Circuit Court for Baltimore City in 1980. In 1983 he resigned and returned to what he called his true passion: litigation.

In 2004, Judge Murphy received the Charles Hamilton Houston Award for Lifetime Achievement in Litigation. He has been profiled as one of the top five lawyers in the state and Murphy is recognized by his peers as one of the best defense attorneys of his time.

Last year, the Freddie Gray case in Baltimore again thrust Murphy into the national spotlight and he continues to represent Gray’s family while prosecutors press on with criminal cases against several police officers involved in Gray’s death.

In January, Murphy was asked to go to Flint by a group of local ministers. He says his visit revealed how residents are living in fear of what has happened to them and their children. Even if the situation is resolved, Murphy says there will be effects that last a generation.

“These people are living a nightmare,” he said.

As to what he expects in the developing legal battle, Murphy said a heavyweight championship-like atmosphere.

“Fifteen rounds and this is round 1,” he said. “We want to help right every wrong that has occurred. We expect these people to lawyer up with the most expensive lawyers in the country but in reality they really shouldn’t spend one penny of taxpayer money to try and defend their egregious conduct.”