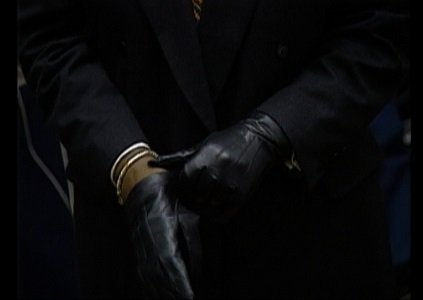 In 1995, O.J. Simpson went on trial for the killing of his ex-wife, Nicole Brown Simpson, and her friend Ronald Goldman, in what became a wall-to-wall televised proceeding. (Pool photo)

(CNN) — Nearly 22 years after the fatal stabbing of Nicole Brown Simpson, reports of a knife discovered on her ex-husband's property are sparking a frenzy of questions.

And authorities are wondering why a former police officer, who kept the knife for years, did not turn it in sooner.

O.J. Simpson was acquitted in the June 1994 killings of his ex-wife and her friend, Ronald Goldman, outside her condominium in Los Angeles.

On Friday, the Los Angeles Police Department announced a knife was allegedly found on O.J. Simpson's former estate in Brentwood.

Former officer George Maycott got the knife from a construction worker in in 2002 or 2003, according to the ex-officer's attorney.

At the time, Maycott was working off duty near the estate, attorney Trent Copeland said.

The construction worker came up to him and gave him the knife, saying he found it "on or near" the old Simpson property.

Maycott retired from the LAPD in 1998, Copeland said, and was working security for a movie or TV show when the construction worker gave him the knife.

The knife was dirty and muddy, and looked like it had been underground, Copeland said. It had no blood or anything to indicate it was used in a violent crime, he said.

Out of an abundance of caution, Maycott called Los Angeles police and told an officer about the knife, according to his lawyer. The officer discussed the call with a supervisor, and told Maycott the case was closed and there was nothing authorities could do. He took the knife home, placed it in a tool box and forgot about it for years, his lawyer said.

When asked during a news conference about Maycott's alleged phone call to police, LAPD Capt. Andy Neiman said, "I don't know that."

The retired officer was at the police academy recently, and the knife crossed his mind, his lawyer said. He thought of getting it framed or put on a plaque, together with a case number, even though there was no reason to believe it was evidence, his lawyer said.

He reached out to a colleague in the police department for a case number, and there's a possibility that colleague may have notified officers about the knife, according to the attorney.

Copeland said his client has been "extraordinarily cooperative" with authorities.

A jury acquitted Simpson in the killings in October 1995, a decision that largely split the country along racial lines. Nicole Brown Simpson and Goldman were white and O.J. Simpson is black.

The weapon used in the stabbing deaths, described as a long, serrated knife, was not found.

Alan Dershowitz, a member of his legal team, said if a knife was recovered from Simpson's former home, it "illustrates what a bad job the LAPD did."

Dershowitz said Simpson would easily prevail in court, as Simpson could not be prosecuted again on charges he's already been acquitted of.

"The only possible way around [double jeopardy] is if you can get a federal indictment for violation of civil rights," but the statute of limitations has "almost certainly" passed on any such violation, Dershowitz said.

Los Angeles police said they are examining the item, including for DNA and hair, but declined to give specific details.

"The actual item is described as a knife. I'm not going to go into the description of the knife because that could be germane to determining whether or not this actual piece of evidence is in fact evidence or is just a facsimile or a made- up story," said Neiman, the Los Angeles police captain.

Police said they learned within the past month of its existence, but did not describe how they found out.

CNN legal analyst Danny Cevallos said the knife could be tested for hair or blood, but it may have "degraded significantly" after being buried in the soil for so long.

A retired LAPD assistant police chief who held that position at the time of the 1994 killings told CNN that if investigators find hair, blood or other evidence on the knife, they eventually could exhume the remains of Goldman and Nicole Brown Simpson to see if the knife and bone damage match.

Neiman said he didn't know why the ex-officer waited so long to turn it over to police.

"I don't know what the circumstances are, why that didn't happen or if that's entirely accurate or if this whole story is possibly bogus from the get-go," he said.

Jeffrey C. Eglash, who served as the LAPD's inspector general from 1999 to 2002, said that if the story is true, it's troubling that an ex-officer "would retain for himself the possible murder weapon from the O.J. Simpson case" instead of giving it to the police for analysis.

Dozens of officers thoroughly searched Simpson's residence and nearby streets after the murders, said Tom Lange, the former lead detective in the case. Authorities are asking the construction worker to come forward.

"Initially ... there were several knives found around the property," Lange said.

"This particular incident, we don't know anything about the circumstances of the recovery. It's very unclear, so we're going to have to wait and see."

Although Simpson was acquitted in the criminal trial, the Goldmans filed a civil wrongful death suit against him. In 1997, a jury found him liable and awarded the family $8.5 million in damages and millions more in punitive damages.

Interest in the killings has spiked since the February debut of the FX television series, "American Crime Story: The People v. O.J. Simpson."

CNN legal analyst Paul Callan, who represented the estate of Nicole Brown Simpson in a civil suit against Simpson, is skeptical of the new find.

"What a coincidence," he said, "all of a sudden the knife would be found in the middle of the TV series. It sounds like a made-in-Hollywood knife discovery."

Maycott's attorney said his client has nothing to do with the FX series, and the timing is "purely coincidental."

Simpson is imprisoned in Nevada in a separate case. In October 2008 he was found guilty on 12 counts, including kidnapping and armed robbery, for a confrontation in a Las Vegas hotel room over sports memorabilia that Simpson said had been stolen from him.

He was sentenced to 33 years with parole eligibility after nine years.