Zoe Saldana, Nina Simone and the painful history of blackface 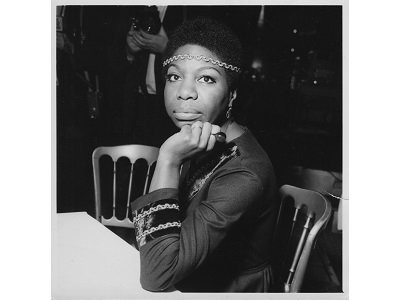 The first look at the upcoming Nina Simone biopic is out, and it's reigniting objections to a light-skinned actress playing the dark-skinned activist and jazz singer. Nina Simone appears in the Netflix original documentary "What Happened, Miss Simone?" (Photo: Peter Rodis/Netflix)

continued — The song became one of the anthems of the civil rights movement, and Simone took it very seriously.

"How can you take the memory of a man like Medgar Evers and reduce all that he was to three and a half minutes and a simple tune?" she was quoted as saying. "That was the musical side of it I shied away from; I didn't like 'protest music' because a lot of it was so simple and unimaginative it stripped the dignity away from the people it was trying to celebrate. But the Alabama church bombing and the murder of Medgar Evers stopped that argument and with 'Mississippi Goddam,' I realized there was no turning back."

She also co-wrote songs such as "To Be Young, Gifted and Black." Being an outspoken critic of segregation in the 1960s came with a cost, and for Simone she paid with the loss of some white fans who were outraged. Some radio stations banned the playing of the song, and Simone's daughter, Lisa, tells the story in the documentary of how boxes of her mother's records were returned from radio stations around the country with the discs broken in half.

Simone's career never quite recovered, and she eventually became an expat, settling in France, which is where she died.

To have such a woman portrayed by someone in blackface is such an affront that even before the film's release there are calls to boycott it.

It doesn't help that Saladana has caused controversy before with her comments about race.

A 2013 interview with BET sparked controversy after the actress said she finds it "uncomfortable to have to speak about my identity all of the time."

"I literally run away from people that use words like 'ethnic,' " she said, "It's preposterous! To me there is no such thing as people of color, cause in reality people aren't white. Paper is white."

There are so many other actresses who could have stepped into the role and not needed shading (Viola Davis is the first to come to mind). During that 2013 interview, Saldana said she found the uproar "disappointing," but the audience could say the same for the tone-deaf way producers have approached this project.

On Thursday, Robert L. Johnson, founder and chairman of RLJ Entertainment, which acquired the film for distribution, released a statement about the issue.

"Zoe Saldana delivers an exceptional and mesmerizing tribute to Nina Simone," said Johnson, who is also the founder of BET. "She gave her heart and soul to the role and displayed her extraordinary talent. The most important thing is that creativity or quality of performance should never be judged on the basis of color, or ethnicity, or physical likeness. Quality entertainment should be measured by the sheer force of creativity and the commitment that an actor or actress brings to the performance. We are proud to distribute the film headlined by Zoe Saldana and David Oyelowo on April 22, 2016."

The fact that the founder of BET does not seem to get it is a further slap in the face.

Lisa Respers France is a senior producer for CNN Digital and host of the "Lisa's Desk" video franchise. The opinions expressed in this commentary are solely those of the author.