Michelle Obama to girls: 'Push past those doubters' 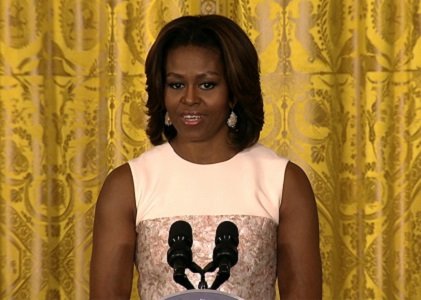 First Lady Michelle Obama joined United States Secretary of Agriculture Tom Vilsack for an announcement on school wellness and to highlight the progress being made in school health environments across the country. (Pool photo)

continued — "Because they live and work in their communities of service, Peace Corps volunteers have close relationships with girls and their families as well as village leaders, teachers, school administrators and others," said Hessler-Radelet during a conference call with reporters. "Working with these key stakeholders, volunteers help identify the specific local barriers to educating and empowering girls and the sustainable interventions needed to break down those barriers."

The consequences of those barriers are "devastating," Obama said, citing how girls who aren't educated face higher rates of HIV, maternal mortality, infant mortality and higher birth rates. They also have lower wages, which impacts not just them, but their communities and their countries, and all of us, the first lady said, citing a study by the World Bank, which found that every year of secondary school education correlates with an 18% increase in a girls' future earning potential.

That point was hammered home by my own 8-year-old daughter, unbeknownst to me, when she wrote an essay about why she thinks girls should get just as much education as boys.

"If you don't get a good education, you can't do a lot of things," she wrote. "For instance, you can't go to college or you can't get a good job and make money for your family." As someone who covers girl empowerment, I was blown away -- and thrilled -- that my daughter seems to have actually gotten the message, even at a such a young age.

If we have "more educated, empowered people in the world buying products and producing goods, and spending resources and traveling and learning -- that's going to impact our economy, as well," the first lady said.

Obama has taken that message to unusual places, from sitting down with YouTube sensation Michelle Phan to being part of an episode on "Project Runway Junior." Her unconventional media strategy -- think dancing with Jimmy Fallon and rapping about college -- is all part of a very well-thought effort on how to reach young people, she said.

"It's simple: Who are we trying to get our message to? And oftentimes, we're trying to talk to young people," she said. "And as a mom living with two generation Zers, I think that's what you all are called. You're Zers -- teens with an attitude. I've got two of them in my house," she said to laughter in the audience. "They're on their phones. They're not watching the evening news. They're not reading The New York Times. No offense, but they're not. So we have to try to reach them where they are."

The first lady said she's just adapting to the changing times, and is convinced that if Eleanor Roosevelt were alive today, she would have a Twitter account, because that's how people communicate today.

There might be different platforms for the "next first spouse" that they'll need to use to communicate with the audiences they are trying to reach, she said, joking that the audience "caught" her use of the phrase "first spouse," which would certainly apply if Hillary Clinton wins the presidency and her husband takes on the role that has always gone to a woman before him.