HopeSprings director honored as Alumni of the Year 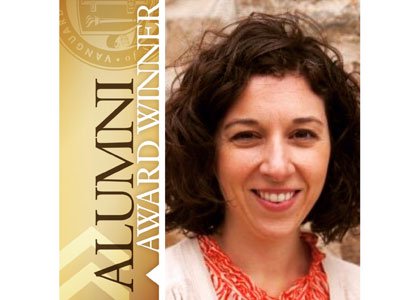 Just two years! That was the gauntlet that Erin Donovan threw down before her husband, letting him know in no uncertain terms that they would only live in Baltimore a short time before moving on.

Donovan, the executive director of the Baltimore-based nonprofit HopeSprings, an organization that seeks to awaken, equip, and engage the faith community by building capacity within HIV Service Providers, had her heart in Africa.

After all, as a young girl, Donovan’s father took her there and she was able to see firsthand the sufferings of many with the deadly virus and disease.

“When I was 14, my father took me on trip to East Africa and that expanded my view on the issues of poverty and other things. When I was in college, I felt a clear call to work in East Africa and that call directed every decision that I made including choosing a major at Vanguard University to spending my summers in Kenya,” said Donovan who last month was named Vanguard University of Southern California 2016 Alumni of the Year.

Donovan has centered her life on helping the HIV/AIDS community.

In 1999, she had the opportunity to work with a professor on a research grant testing a rapid, 20-minute HIV test. “After graduating, I moved to Kenya to do community health education and development work. I spent much time in urban shantytowns with open sewage and no running water. I began to see death everywhere, but HIV/AIDS was never mentioned,” she said. “It was tuberculosis, cancer, or dehydration caused from diarrhea, but never HIV/AIDS. As I began to learn, the stigma and discrimination led to silence, and the silence led to death. Parents passed away, and small children were left to run the streets. This exposure to death shaped me, but so did the church’s response.

Organizations like ours, World Relief, and World Vision were training churches not just to provide education but also to surround our Kenyan brothers and sisters, so that they may die in dignity. Those were the days when medication was not readily available.”

When Donovan returned to the United States, she got married and moved to Baltimore.

She said the plan was to stay in Charm City for two years and then go back to East Africa. However, she said a friend asked her a question that changed everything, including her desire to move; what happened to the passion she had while serving in Africa and why couldn’t she do that in Baltimore?

She then was told about HopeSprings and that’s when she learned that so many in Baltimore were living with HIV. “I didn’t need to go to East Africa, there were problems right here that I could help,” Donovan said.

A little more than five years ago, Donovan became executive director at HopeSprings which develops networks of faith communities in the Baltimore area and beyond to train congregants as volunteers with a goal of reducing the spread of HIV and its stigma and to provide hope to those affected by HIV and AIDS.

“I had the opportunity to really find where my passion is and look at social justice issues and to get involved in the world of HIV and AIDS, fighting against the stigma,” Donovan said. “I’m so thankful for that opportunity to be a part of that community. It can be a tough thing for the faith community to be engaged in.”

Donovan said her husband and two young children are also very much involved.

“It’s a family thing. My daughter is six and my son is eight and they know all about the HIV/AIDS situation and they interact with all types of people. They have a heart of compassion and that’s the way I want my family to be,” Donovan said. “It’s all about raising the next generation of kids who see needs and what assets are in the community. It’s about a concept of building a brighter future and I want my kids to be a part of that. I want them engaged because a zip code shouldn’t determine what you do or what you have access to.”