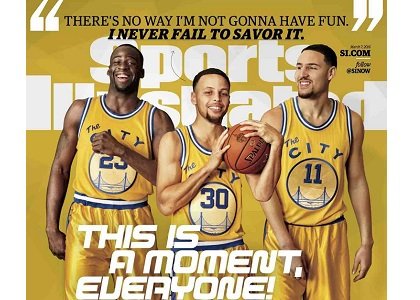 As the Golden State Warriors plow through their history-making season, superstar point guard Stephen Curry is having the time of his life -- and there's nothing wrong with that, says CNN's lead NBA analyst Steve Smith.

"It is business, and he's making it look fun," says Smith, who earned a championship ring with the 2003 San Antonio Spurs and played against the 1996 Chicago Bulls, whose 72-10 record Golden State is chasing.

"In the old school days, everything was about business, where you had to have this stern look and this focus. You can't say (Curry) is not focused because of the numbers he's putting up, and his team is winning," adds Smith, who calls Curry the greatest shooter in NBA history.

"He plays the game with a smile, and a lot of unorthodox shots. He's taking shots at half court and making it look easy.

"What he's doing right now is more entertainment than basketball."

Smith isn't kidding. Curry has recently taken to spinning around after shooting three-pointers, gauging whether the shot has dropped in by the reaction of the crowd (46% of the time, it does). It's a borderline-cocky move reminiscent of vintage Larry Bird.

But the great 1986 Boston Celtics team, which went 40-1 at home on the way to winning a championship, never had this much fun. In fact, no championship-contending squad in memory has exuded this much playfulness (the 1985 Showtime-era Lakers were close, but featured brooding Kareem Abdul-Jabbar as Finals MVP.)

Part of the reason why Curry has enjoyed this much success beyond the arc is because of the way the game has changed, says Smith, a former All-Star known for his defensive prowess.

"In our day you could hand check; I could grab him, I could foul him hard, and all that I would get was a personal foul. Now...you would probably be ejected from the game," he says.

"There is a misconception that old legends are criticizing Stephen Curry's game. I don't think that's it," Smith says about recent statements made by Oscar Robertson and Isiah Thomas.

"Most of the legends are talking about the defenses, the way it's played, the rules have changed a lot. They are basically saying, in our era, we would not have allowed this to happen. No one is saying Stephen Curry is not a great player."

On the contrary, says Smith: "He became the best player in the NBA last season, and this season I think he'll win MVP as well."

But would this season's Warriors beat Michael Jordan's record-breaking Bulls? It's a question that's been asked countless times this season.

"If the Golden State Warriors were playing in that era, it would be much harder," says the 6-foot 8-inch former guard tasked with stopping Michael Jordan. "I give the advantage to the (1996) Chicago Bulls. But the Bulls playing Golden State in this era? It would go down to a Game 7 series, down to the last shot -- either between Michael or Stephen Curry."