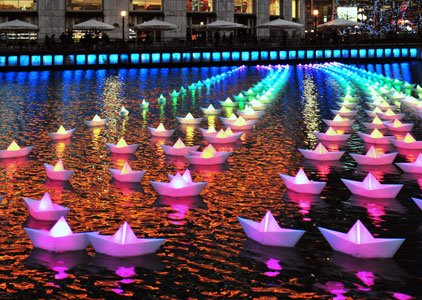 BALTIMORE — You are at Baltimore’s Inner Harbor, and spot a giant lotus flower sculpture, which lights up the water. You walk along a little further and now see hundreds of paper boats, which are changing colors. You now glance over towards The National Aquarium and see fish and crabs on the façade of the facility. You are not seeing things. You are at Light City Baltimore, a festival of light, music and innovation.

The event is free and open to the public and is the first large-scale international light festival in the United States.

“We are excited about Light City Baltimore,” said Kathy Hornig, festival director for the Baltimore Office of Promotion &The Arts. “About a year-and-a-half ago, two visionaries by the name of Brooke Hall and Justin Allen came to my office and asked about having a light festival here in Baltimore like the one they have in Sydney, Australia. Our events include Artscape and The Baltimore Book Festival, so it only seemed natural to take on this newest festival for our city.”

According to Hornig, the original artworks are by local, regional, national and international artists who were selected by a jury through a call of entry held in the spring of 2015.

“They reviewed more than 240 proposals,” said Hornig. “We were thrilled with the amount of proposals, especially with this being our first year. Everyone is really looking forward to it.”

Many downtown restaurants, attractions, museums and retailers have teamed up with the Baltimore Office of Promotion & The Arts and Visit Baltimore to offer unique experiences for festival goers during Light City Baltimore.These include special Light City-themed events; light displays on buildings; free glow-in-the-dark souvenirs for patrons; Light City-themed menu items; deals and discounts and more.

“We can’t wait to see all the lights come on Monday night at 7 p.m.,” said Hornig. “That evening will also feature a grand illuminated procession by the BGE Light Art Walk. Light represents so many things. One of the interesting aspects of the festival is how the artists took that medium and used it in so many different ways.”

Hornig says the event will also kick-off the tourism season for Baltimore, which has struggled to attract visitors since the aftermath since Freddie Gray’s death last April.

“Through this event, we are hoping to shine the light on all the positive things happening in our city,” said Hornig, noting that CNN listed the event as one of the top things to see in America. “It’s been a rough year, and we are hoping that Light City Baltimore will be an important part of bringing positivity back to our city, and helps to showcase the wonderful things Baltimore has to offer.”