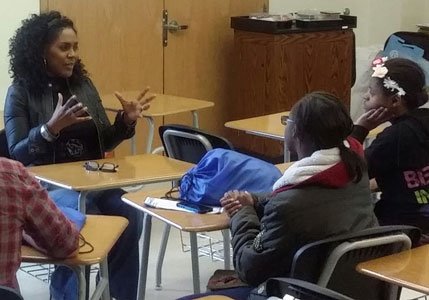 Women’s History Month highlights the contributions of women in American history during the month of March. However, the achievements and accomplishments of young black women in contemporary society are also worthy of acknowledgement.

Tiffany L. Gill, a filmmaker, writer and founder of Black Opal Media, was raised in Baltimore and attended Towson State University. Today, Gill is working to give girls and young women of color a voice through film, programming, conversation and a growing social movement.

The purpose of her forthcoming documentary called Black Girls Unscripted (BGU) featuring, predominately African-American and Afro-Latin girls from the ages of 11-22, is to provide an opportunity to see themselves in ways that they may not in mainstream media and tell their own stories. Girls who are excelling in various areas will also be highlighted as stereotypes are challenged.

The creation of the forthcoming film project is rooted in a conversation Gill had with a former 13-year-old mentee. The girl’s mother died from breast cancer. She returned to the area to visit her grandmother, after moving out of state with her father. When Gill saw her again in 2013, a conversation led to the teenager revealing news of her attempted suicide.

“I asked her why and pretty much outside of mental health issues that I discovered later that ran in her family, she said, ‘I hate being dark-skinned. I hate my wide nose. I hate my hair. All the boys in Texas like the light-skinned or Spanish girls,’” Gill said. “She went a step further to say: ‘I never see anyone in media who looks like me that’s considered kind or pretty or smart.’”

Gill added that probably the most profound thing her mentee said to her was that there is nothing good about growing up to be a black woman. The next day, the teenager proposed the idea showing different media imagery where women of color are represented through something better than degrading or stereotypical images in popular culture and media.

“That conversation was really the springboard for this project,” Gill said, referring to her documentary and movement.

Filming has taken place in Baltimore, the District of Columbia, New York and Chicago. Gill explained that the project will follow girls of color through their challenges and triumphs. A fundraising initiative to complete production and editing of the project will be launched in late spring.

Gill is also a former nonprofit executive who integrated an opportunity for girls ages 13-19 to talk about hot-button topics during listening sessions that will be held every two months at the South Bowie Branch Library, located at 15301 Hall Rd. in Bowie, Md. BGU Listening Sessions are facilitated by team members, Charmayne Walker—BGU’s social media director—and Belinda Brewington—BGU’s community relations director. Gill said the discussions are also a great opportunity for girls to make new friends.

Marian D. Daniel, a BGU advisory board member and supporter from Baltimore said that the project provides a place and atmosphere where girls can safely express themselves without being judged. She added that their voices have been silenced because no one is typically interested in truly hearing them.

Additionally, VeTalle Fusilier—BGU’s development consultant, advisory board member and longtime supporter said the team identified a key area that she would like to see change occur through BGU’s impact.

“Most importantly, as the title suggests, we want Black girls to see themselves as they truly are—unscripted. Not a fictional, idyllic portrayal, but unscripted, beautiful, smart and savvy,” Fusilier said. “It is the story of Black girls achieving in different environments, triumphing despite limiting circumstances, (and) maximizing their opportunities for growth and self-realization.”

Gill wants the collection of empowering messages to reach communities where girls need them most.

Dr. Avis Jones-DeWeever, founder of Exceptional Leadership Institute for Women, was interviewed for Gill’s project and described its value as tremendous.

“It provides a much needed focus on the often unspoken needs and challenges faced by Black girls, and creates the impetus for the rest of us to do a better job at meeting those needs,” Jones-DeWeever said. “Our girls deserve it.”

A BGU listening session will be held on March 26, 2016 at 10:30 a.m. at the South Bowie Branch Library. The event is free but registration is required via https://www.eventbrite.com/e/black-girl-unscripted-listening-sessions-tickets-22183615792. To learn more about BGU, please visit www.blackgirlsunscripted.org.