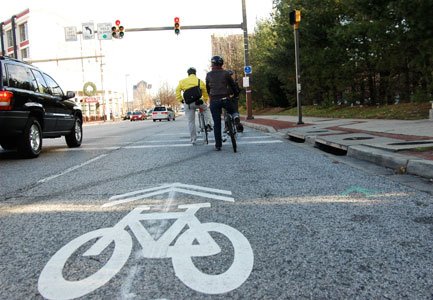 The “My City Bikes” Baltimore app is a guide to biking in Baltimore for beginners. It offers need-to-know safety information, DIY bike maintenance information and local bike riding suited to beginners. (Above) Sharrows and cyclists at the intersection of Boston and Hudson Streets in Baltimore City. (Photo: Elly Blue)

“For the average commuter, when you look at operating costs, a bike costs about 10 cents per mile, public transit breaks down to roughly 14 cents per mile and a typical sedan costs about 58 cents per mile,” said Tina Schmidt, of My City Bikes, a public health alliance that helps individuals enjoy better health and quality of life through biking.

Add all of that to the fact that bike commuting allows an individual to combine their daily exercise and commute into one and more people are now motivated to get out and enjoy a daily bike commute instead of being stuck in traffic, Schmidt said.

With the arrival of spring, bikers are hitting the road and My City Bikes offers a mobile app, which is said to be the official guide to beginner biking in hundreds of communities.

“My City Bikes is a mobile and web-based public health alliance of communities, organizations and local businesses dedicated to helping people discover better health and quality of life through biking,” Schmidt said. “We work with local partners like the City of Baltimore and Race Pace Bicycles who are dedicated to community health to establish utility style, community-based mobile apps and publicly accessible information that make it easy and approachable for people to bike regularly.”

The My City Bikes app is a guide to biking in Baltimore for beginners. It has need-to-know safety information, DIY bike maintenance information, and local bike riding that is suited to beginners.

“A lot of people can be overwhelmed when they think about biking, and try to find local information. Every ride detailed in the My City Bikes Baltimore app is beginner level, so a new rider can choose any road, mountain or recreational option with confidence,” Schmidt said.

My City Bikes started in 2010 and today provides local bike guides for beginner cyclists in more than 300 communities in three countries.

While commuting on bikes can provide many benefits, it can also help keep children active as well, according to Schmidt.

“When you look at recreational biking you can take that a step further. These days people are concerned with not just their physical activity levels, but that of their kids as well,” she said. “While the many groups and gyms and activities that are available are great, biking is unique in that you can do it together as

“Not to mention you can't really text or talk on the phone while biking so you get good old fashioned family time and exercise rolled into one. The reasons to bike are as diverse as the people who ride bikes, but every person has a great reason. Hopefully another reason that we see this is because biking is becoming more accessible for beginners,” she said.

Also, it’s important that bikers realize all of the options they have available to find a bicycle and place to ride that suits them, Schmidt said.

“Bike shops like Race Pace Bicycles are revolutionizing the idea of the bike shop from a place for elite enthusiasts to a place for everyone. That has opened the door for people to feel welcome and open to the idea that they, too, can bike,” she said.

“It doesn’t matter if you're just spiffing up the old bike in the garage, getting something shiny and new, or just want to go ask a bunch of bike questions.

“When you have a shop like Race Pace combined with the My City Bikes Baltimore mobile resource that the City of Baltimore has helped provide, every local rider is set up for success and has an unprecedented support system. It is a great time to be a beginner cyclist.”