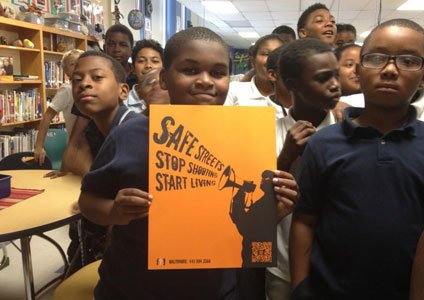 A new “Safe Streets” facility was opened in the Sandtown-Winchester neighborhood on Thursday, March 17, 2016. The initiative employs and trains outreach professionals to de-escalate and mediate disputes that might otherwise result in violence. (Photo courtesy/Safe Streets Baltimore)

Ten safety counselors joined representatives from the mayor’s office on March 17, 2016 to open a new Safe Streets facility in the Sandtown-Winchester neighborhood.

Located inside a former Catholic convent, it might be seen as a fitting backdrop in contrast to the gun violence that has plagued the area, which became the center of national attention last year because of a resident named Freddie Gray.

“The Safe Streets program has realized significant success across Baltimore City, with two sites having at least one twelve-month period with no homicides,” said Sean Naron, a spokesman for the city’s health department. “In 2014, Safe Streets workers had 15,000 client interactions and mediated 880 conflicts. More than 80 percent of those interactions were deemed to be likely or very likely to result in gun violence.”

“Most of us come from this environment and we understand the body language,” said Imhotep Fatiu, a former convict who spent 14 years in prison and is now the director for the new Sandtown-Winchester office.

In 2015, five people lost their lives to gun violence in the blocks where the new Safe Streets office is located. Also, 12 others survived shootings but the 344 murders in the city last year were the deadliest in Baltimore history, according to health officials.

“Violence is a public-health issue. Violence spreads from person to person just like other diseases,” said Dr. Leana Wen, the city’s health commissioner.

Naron says Safe Streets has made a significant difference with violent crime dropping 50 percent in those neighborhoods that include Cherry Hill, McElderry Park, Mondawmin and Park Heights.

“Safe Streets is a program that has been proven to reduce gun violence, and I think all of us know it is important to expand this program into the Sandtown-Winchester neighborhood,” Mayor Stephanie Rawlings-Blake said at a March 17 press conference to announce the program’s launch.

“These are individuals who come from the communities they serve,” said Dedra Layne, director of Safe Streets Baltimore, adding that many Safe Streets outreach workers were once “a part of the problems these communities have been impacted by.”

“They have recommitted themselves to strengthening the communities they were once part of tearing apart,” she said.

Safe Streets maintains that violence is a learned behavior that can be prevented using disease control methods.

Safe Streets Baltimore was launched by the Baltimore City Health Department in 2007 as a replication of the national Cure Violence program. The public health initiative employs and trains outreach professionals to de-escalate and mediate disputes that might otherwise result in acts of violence.