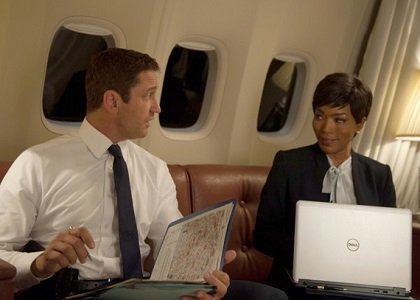 (NNPA) — A good action-thriller movie keeps you tense, engaged and excited. A great action-thriller does all that and you still feel anxious long after you’ve left the theater. This sequel to the $161M-grossing Olympus Has Fallen, about a Secret Service agent who guards the president, is good but not great.

Creighton Rothenberter and Katrin Benedikt wrote “Olympus.” This project has added two more writers to the team, Christian Gudegast (Man Apart, Immortals) and Chad St. John, to flesh out the storyline. In the beginning, it’s political, suspenseful and intriguing. Then the script drifts into a mindless, straight-out action film with lots of gunfire, blasts and fistfights.

Director Babak Najafi (“Banshee” for Cinemax) keeps the pacing crisp for one hour and 45 minutes. No time to get bored, and he’s pretty good at coordinating the action scenes. None are particularly original or over the top (like the opening sequence of the James Bond movie Spectre), but they are engrossing.

Aamir Barkawi (Alon Aboutboul, “The Dark Knight Rises”), a sociopathic international arms dealer, throws his daughter a lavish wedding on a rooftop in Lahore, Pakistan. A U.S. drone bombs the event. All assume Barkawi and his evil son (Waleed F. Zuaiter, from the film “Omar”) are dead.

Before anyone can step into St. Paul’s Cathedral and sit in a pew, visiting dignitaries are killed, London landmarks are blown up and the POTUS, Jacobs and Banning barely escape a hail of bullets. London, under siege, is locked down. Back home, Vice President Trumbull (Morgan Freeman) and his staff (Melissa Leo, Robert Forster, Jackie Earle Haley) work feverishly with officials in the U.K. to find out who is behind the massacre and save the president.

Long before heads of state are picked off like sitting ducks, the camerawork (Ed Wild) is doing grandiose panoramic shots of London and the musical score (Trevor Morris, Olympus Has Fallen) is blaring like a broken speaker in a mall. By the time the real action starts, it’s too late for the music to crescendo, it’s already loud and melodramatic. The soundtrack becomes less of a sore point once the action sequences kick in, which are well-paced and decently edited (Michael J. Duthie, Paul Martin Smith). Your eyes are stuck to the screen, for a lot of shallow reasons. There is no depth.

Eckhart is about as accessible and watchable as a young Robert Redford. He doesn’t have the intensity of a Christian Bale, but he has a strong screen presence. Freeman as Trumbull, the man in charge, doesn’t build on the deep-voice and authoritative persona audiences expect from him. His characterization of the V.P. borders on cliché. Aboutboul and Zuaiter are fine within the confines of their roles.

Angela Bassett suffers from the Leonardo DiCaprio syndrome. She is far more talented than most of the films she is cast in. You hope one day a project will come her way that is worthy of her skills and visible enough for her to win a long overdue Academy Award. When Jacobs tells Banning, “Make those fu—– pay,” you don’t doubt her sincerity.

Gerard Butler is the new John Wayne. He shoots, kills and chokes multitudes of assailants, barely getting nicked in the process. There isn’t much reality connected to what he’s doing and the role he plays is never more than two-dimensional: loving husband, super-human Secret Service man. Nonetheless, he’s fun to watch.

It should be noted that this film seems a bit heavy on evil Pakistanis and light on normal ones. It is the duty of the screenwriters, director and producers to make a movie that reflects the good and bad in every culture. That doesn’t happen in this film.

For a bullet-a-minute action/thriller, London Has Fallen is good. Never great.