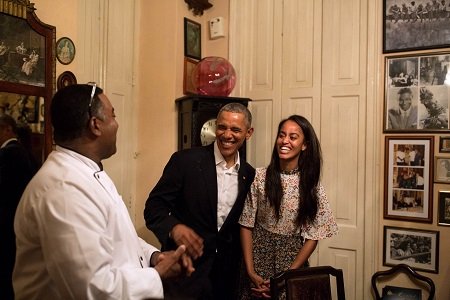 She'll begin there in the fall of 2017, after taking a gap year, the White House announced Sunday. She'll be a member of the class of 2021.

Obama said at the White House Correspondents' Dinner on Saturday that his family plans to stay in Washington for two years after his presidency ends so that their youngest daughter, Sasha, can finish high school.

"Our decision has actually presented a bit of a dilemma because traditionally presidents don't stick around after they're done. And it's something that I've been brooding about a little bit," Obama joked during the comedy routine at the dinner, using it to launch into a video about what he'd do after leaving office -- which featured Vice President Joe Biden and former House Speaker John Boehner.

He also joked that Michelle Obama is eager to "stay closer to her plot of carrots. She's already making plans to see them every day."

Malia Obama's year-long deferral before her first year at Harvard is a route taken by about 80 to 110 students admitted students. Higher education experts tout the off-year as a way to travel, engage in a long-term special project or otherwise use the time in a constructive and meaningful way.

Malia Obama is far from the first child of a president to make a college decision while her father occupied the Oval Office.

Chelsea Clinton began her undergraduate studies at Stanford University in California in the fall of 1997 -- before her father, Bill Clinton, departed office in early 2001.

George W. Bush's twin daughters began college just months before their father's election in 2000 -- with Jenna Bush Hager attending the University of Texas and Barbara Pierce Bush attending Yale University, her father's school. Both graduated in 2004, near the end of their father's first term.