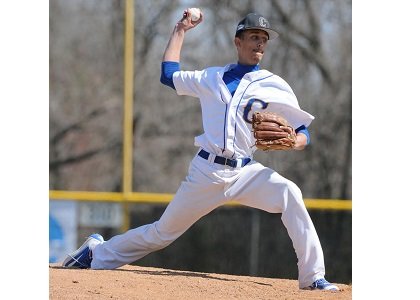 PRINCESS ANNE, Md. — Coppin State baseball split a pair of games in a double header at Hawks field on Saturday, April 30th. Pitcher Aaron Rea had a complete game giving up no earned runs in a 4-1 victory in game one, but the Hawks came back with a 7-3 win in game two.

Four other Eagles recorded singles against the Hawks as Coppin State dominated game two of the weekend series at Hawk Stadium. CSU notched runs in the first two innings with O'Dwyer scoring on a fielding error by the UMES defense after the first. Senior outfielder George Dragon singled to center field in the first for the only hit of the inning. In the second, Dower singled to right field while O'Dwyer sent a ball to center field and freshman outfielder Devin Rivera Ozuna hit an RBI single to first base for CSU's three hits of the inning. Rivera's single sent Dower home for an Eagles, 2-0 lead.

O'Dwyer kept things rolling with an RBI single to second base in the fourth inning allowing Dower to cross home plate for the second time of the game and giving CSU the 3-0 advantage. Later on in the inning, O'Dwyer stole second base and then scored on a fielding error by the Hawks (4-0).

The Hawks squeezed out one run in the sixth inning as Coppin State held on for a 4-1 win. Freshman Nazier McIlwain and John O'Dwyer also recorded hits against the Hawks.

In game two, Coppin State put together three runs on three hits during the sixth inning. Andrew O'Dwyer doubled to center field and then scored as Nazier McIlwain singled to center field for an RBI. George Dragon had the second Eagles hit of the inning singling to left field as McIlwain crossed home. After a pitching change by the Hawks junior infielder Bryant Miranda scored on a wild pitch for their final run of the game.

UMES scored one run in the fourth and fifth innings, two in the sixth inning, and three in the eighth inning cruising to a 7-3 victory in game three of the weekend series. Coppin State won two out of the three games this weekend and has a two game lead over the Hawks in the MEAC Baseball northern divisional standings.

Senior outfielder Darien Percell knocked in two doubles carrying the Eagles at the plate. O'Dwyer also hit a double, McIlwain extended his current hitting streak to 12 games, and Dragon recorded his 41st hit of the season.

Coppin State has an overall record of 11-32 with an 8-13 MEAC record. Maryland Eastern Shore falls to 14-29 and 6-14 in the MEAC. The Eagles travel to Washington, DC on Wednesday, May 4th for a single game showdown against the Georgetown Hoyas at 7 p.m.