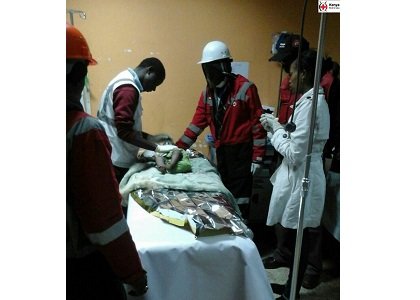 A baby girl receives treatment after being rescued after 80 hours trapped in the rubble of a building in Nairobi, Kenya. (Photo: Kenya Red Cross)

NAIROBI, Kenya (CNN) — A baby girl has been rescued after 80 hours trapped in the rubble of a collapsed residential building in the Kenyan capital, in what emergency workers are hailing as a miracle.

The infant was pulled alive from the debris at about 4 a.m. local time Tuesday (9 p.m. Monday ET), the Kenya Red Cross said in a statement.

"(The) guys were saying it's a miracle for the baby girl to have been in there without a scratch," said Bonny Odhiambo, a Red Cross EMT who led the team involved in the rescue.

The baby, later identified as 6-month-old Dealeryn Saisi Wasike, has been reunited with her father, according to a statement from the Red Cross.

Odhiambo said the infant was discovered by a military search and rescue team using specialized equipment that detected breathing beneath the rubble.

Soldiers and EMTs quickly dug into the debris and found the child -- who was wrapped in a light blue blanket -- inside of a bucket.

Her positioning apparently helped her survive the collapse of the seven-story residential building, which killed at least 23 people.

The building, in the capital's Huruma district, fell as heavy rains inundated the city Friday. It had previously been condemned, police say, and the building owner is in police custody.

With no ambulance on hand, rescue workers raced the baby to the nearest medical facility in another rescue vehicle to check her vital signs, Odhiambo said.

"We were just holding her and saying 'Go! Go! Go!'" said Odhiambo.

"I was worried that her lungs would be affected by the dust, and that she might have hypothermia as it was cold and wet down there due to the rain. But she was breathing."

She appeared dehydrated, but had no visible injuries, and was subsequently taken to Kenyatta National Hospital for treatment, the Red Cross said.

"It's scary, I have kids of my own, I took it like it was my own child, it was like she was my baby," said Odhiambo. "I had faith that we could save her."

Odhiambo said the rescue was a huge morale boost for emergency workers, who, until that point, thought they would only be finding bodies, not survivors.

So far, 136 people have been rescued from the rubble, according to Nathan Kigotho of Kenya's National Disaster Operation Center.

The prospect that there were others alive beneath the debris was slowing recovery efforts, he said.

"We are trying to speed up but we have to be cautious," he said.

"Some people are lucky and survive through air pockets well beyond our expectations... We have to go slowly and carefully."

Two other young children have been rescued so far, although they came much earlier in the operation. Hours after the disaster, a man emerged from the rubble holding up a baby wrapped in a blanket, and the crowd erupted into cheers.

Another man followed him, carrying a toddler also pulled from the debris. Both children were rushed to waiting ambulances.

It's unclear what caused the building to fail during the storm, but residents told the Red Cross the bottom floors caved in first.

Kenya Police spokesman Charles Owino said it was too early to give definitive answers, but he expected preliminary information soon.

"It's not a new building; it's an old building, so hopefully the planning department is able to tell us," he said.

"We don't how how much the heavy rains could have caused the building to fall. There could be other technical reasons."

Kenyan President Uhuru Kenyatta asked the country's disaster authorities to survey other houses in the area, determine if any were likely to collapse and move residents out, the National Police Service said.

He also ordered the owners of any unstable structures be arrested due to the fact that the collapsed building had previously been condemned by the National Construction Authority, the police statement said.