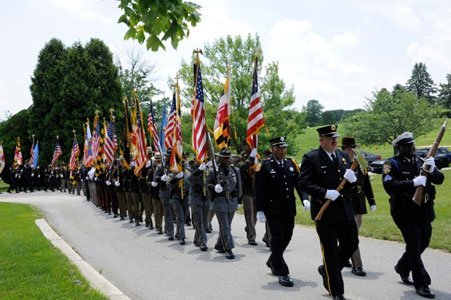 The 31st Annual Fallen Heroes Day, a day set-aside to honor and remember police, firefighters and emergency medical workers and rescue personnel who died in the line of duty will be held on Friday, May 6, 2016 at Dulaney Valley Memorial Gardens at 1 p.m. (Photo: Bill McAllen)

On Friday, May 6, 2016, hundreds of law enforcement officers and firefighters, dignitaries and members of the community, family and friends will gather at Dulaney Valley Memorial Gardens for the 31st Annual Fallen Heroes Day, a day set-aside to honor and remember those who died in the line of duty. The 1 p.m. ceremony, which honors those whose deaths have been declared "line of duty" during the past year, is the only statewide ceremony in the nation that brings together all segments of the public safety community. Fallen Heroes Day salutes police and correctional officers, firefighters, and emergency medical and rescue personnel who risk their lives every day to protect the citizens of Maryland.

Since the 2015 Fallen Heroes Day ceremony, four police officers have died in the line of duty. They are:

The 31st Annual Fallen Heroes Day ceremony begins with a procession of more than 25 honor guard units from across the state, police motorcycle and mounted units, bagpipers and drummers. Baltimore Sun writer Fred Rasmussen will be the keynote speaker and Baltimore County Executive Kevin Kamenetz will give a memorial address. Rachel Barr, the daughter-in-law of 2014 Fallen Hero Fire Police Captain David Barr, Jr. of the Community Fire Company of Perryville, will speak as a survivor. Harford County Executive Barry Glassman and Montgomery County Executive Ike Leggett will also participate in the ceremony. Television news anchor and radio host Mary Beth Marsden will serve as the emcee.

During the ceremony, after each 2016 fallen hero is remembered, his family will be presented with a replica of the Fallen Heroes Memorial and a resolution from the Maryland General Assembly. Additionally, one police officer and one firefighter who died in the line of duty before Fallen Heroes Day was established in 1986 will be remembered and their family will be presented with a Governor's Proclamation.

"For more than 30 years, Dulaney Valley Memorial Gardens has honored Maryland's fallen heroes— public servants who have given their lives in the line of duty," said John O. Mitchell, III, Chairman of Dulaney Valley Memorial Gardens. "Fallen Heroes Day provides an opportunity for the citizens of Maryland to take time to show appreciation and respect for the men and women who risk their lives each day when they report to work."

Dulaney Valley Memorial Gardens was established in 1958 by John Armiger, Sr. In 1976 he set aside 330 burial spaces for fallen heroes and their spouses. Ten years later, John Armiger, Jr. established the tradition of Fallen Heroes Day. The 70-acre cemetery was purchased by John O. Mitchell, III of the family-owned Mitchell-Wiedefeld

Funeral Home in Rodgers Forge/Towson, MD in 2007. The Mitchell family is proud to continue the tradition of Fallen Heroes Day. Currently, 69 members of the public safety community, including Harford County Deputy Mark Logsdon, are buried at the Fallen Heroes Memorial.

Keeping with tradition, Governor Larry Hogan has issued a proclamation declaring May 6, 2016 as Fallen Heroes Day in Maryland and has ordered flags flown at half-staff at the State House and all state facilities.