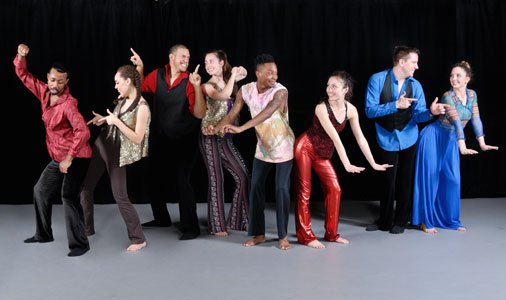 The Anne Arundel Community College Dance Company rehearsing “The Hustle,” one of the dances to be performed at its “Spring Migration” concert at 8 p.m. May 6 and May 7, 2016 in the Robert E. Kauffman Theater of the Pascal Center for Performing Arts. For tickets, contact the box office at boxoffice@aacc.edu or call: 410-777-2457. (Photo: Rosemary Malecki)

Directed by Lynda P. Fitzgerald, coordinator of performing arts – dance, the program includes three works that Fitzgerald has choreographed along with original pieces choreographed by some of the dance company members. Fitzgerald’s “No Bones About It,” set to the music of Wolfgang Amadeus Mozart, recently received enthusiastic response from adjudicators and an audience at the American College Dance Association conference at the University of Wyoming. Her second piece, “Play Ball,” is set to the music of Hot Butter. She reconstructed a 2006 piece, “Where Were You When I Had Saturday Night Fever?” which is set to the Disco sound of Barry White.

The student pieces include three works by Evelyn Paddy of Centreville, AACC Dance Company president; a new solo and a new group piece by Arrington Lassiter of Washington, D.C., company vice president; a piece by Adrian Gusky of Davidsonville, company treasurer; and a group hip-hop piece by Rashad Ferguson of Clinton. Other pieces were choreographed by students Amber Hodak of Severn, Maddie Leo of Crofton, Elda Trombley of Arnold, Tevin Williams of Brooklyn Park and Clare Wood of Edgewater.

Tickets are $15 general admission; $10 for senior citizens, outside students, groups and AACC employees; and $7 for AACC students with current ID. To reserve a seat, contact the box office at boxoffice@aacc.edu.