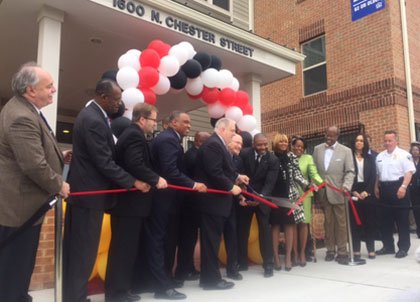 The ribbon cutting was part of the festivities for the grand opening of the Mary Harvin Senior Center. The ceremony took place on the one-year anniversary of a tragic fire, which destroyed the development on April 27, 2015, during the riots.

At the time of the blaze, the project was 45 percent complete.

“I remember seeing the fire on the news and rushing out here,” recalled Baltimore City Housing Commissioner Paul T. Graziano. “It was a tearful event and very sad. I want to thank Pastor Hickman, Eric Booker and other community leaders who had the faith to persevere in the face of adversity. It is just a wonderful example of what we can do if we all work together. We have seen blight turn into beautiful new homes.”

With immediate and strong support from the State Department of Housing and Community Development, Baltimore Housing, and the project’s financial partners, Hudson Housing Capital and Capital One Bank, The Woda Group, Inc., moved with determination to reconstruct the project after the devastating fire. After restarting construction, the Mary Harvin Senior Center was completed 69 days ahead of the scheduled completion date.

Located at 1600 N. Chester Street, the Mary Harvin Senior Center is a $15 million development project that replaced a blighted block with 61 units of high-quality, affordable senior housing, along with counseling and job training space.

“I am happy,” said Pastor Hickman. “Our vision has been to restore. I am happy about the tenacity, the resilience and the partnerships that went into rebuilding after the fire. The fire shed a tremendous light on a community that has suffered and experienced so much disinvestment. But we praise God that none of those obstacles prevented us from moving forward to rebuild, and there is much more to come.”

The development is named after the late Mary Harvin, a founding member of Southern Baptist Church, whose leadership was vital to the church and its community.

“A lot of people have an idea or something they want to accomplish,” said Woda Principal David Cooper. “Congratulations to Southern Baptist Church for wanting to build across the street, and bring this to fruition. Completing a project like this is difficult in normal circumstances and nearly impossible when you throw in the events like the one last year. As a company, we appreciate the effort and time it took to complete what you see today.”

According to WODA, it is a fully integrated, multi-functional developer, general contractor, and property management firm committed to providing quality affordable rental housing.

“Rising from the fire is a real symbol of hope and faith,” said Baltimore City 12th District Councilman Carl Stokes, who was among the many elected officials who attended the event. “God is good all the time, and He has brought us together in communication and collaboration and it is good. We thank the WODA group for being a part of Baltimore. It is a great anchor in the community.”

Mary Coles attends Southern Baptist Church, and was among the congregants who attended the event.

“I am elated,” said Coles. “This building is a great enhancement for the community. But, this is just one step. Southern Baptist Church is on the move.”

Sheila Starkes has lived in the community for over 60 years. She recalled watching the fire a year earlier from her home.

“I live across the street from this building,” she said. “I watched them build it up, and I also saw the fire destroy it. It was horrible to watch. But the building has gone back up again, and it is great for the seniors. I give God the credit for allowing it to be rebuilt.”