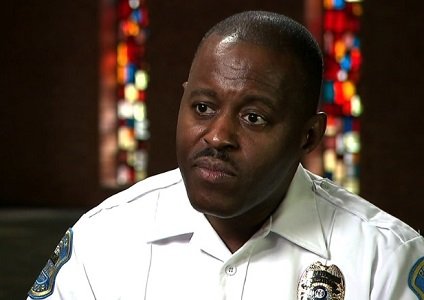 (CNN) — The city of Ferguson, Missouri, swore in Delrish Moss as its first African-American police chief on Monday.

"Let's go to work," Moss told the crowd at his swearing-in ceremony.

A longtime veteran of the Miami Police Department, Moss was selected from 54 applicants to fill the role. He is expected to help rebuild the Ferguson Police Department after racially charged protests broke out over the 2014 shooting death of African-American teenager Michael Brown by a white police officer.

The new face of Ferguson police

The city of Ferguson, Missouri, swore in Delrish Moss as their first African-American police chief. CNN's Sara Sidner speaks to the new chief about his qualifications.

Moss said Monday the task before the department was to bring "nobility" back to police work.

"If you work hard, if you stay honest and committed, if you maintain respect for the community and do your job well, we will get along just fine," he said, addressing the police officers in attendance.

Moss may be new to the department, but the problems he faces are not. He'll be tasked with healing a fractured community in the spotlight since Brown's shootingof . He'll have to navigate a mostly white police department in charge of a majority black city.

And he'll be expected to reform the department under the wary eye of the U.S. Justice Department.

Moss said he is up to the task. It's a job he's been training for his entire life, starting with his childhood in Miami and throughout his 32 years with the Miami Police Department.

"I think this is a job based on my previous career that I've been training my entire life for," he told CNN's Sara Sidner.

Moss is replacing Tom Jackson, who resigned last year after a Justice Department report cited racial bias in Ferguson's criminal justice system. The report called for reforms after finding what they called a "pattern and practice" of unconstitutional police conduct in the city.

The federal government sued in February after the Ferguson City Council balked at some terms of a negotiated deal, but the city averted further legal woes in March by unanimously agreeing to accept a Justice Department overhaul of its troubled police force and municipal courts.

In its report last year, the Justice Department highlighted a policing system that uses arrest warrants as generators of income. The report described police practices "shaped by the city's focus on revenue," not public needs.

"This emphasis on revenue has compromised the institutional character of Ferguson," the report said.

The disproportionate number of arrests of minorities was a result of bias, not crime, the report said.

"These violations were not only egregious, they were routine. They were encouraged by the city in the interest of raising revenue," U.S. Attorney Loretta Lynch has said. "They were driven, at least in part, by racial bias and they occurred disproportionately against African-American residents of Ferguson."

As Ferguson works to recruit more minorities, a big part of the police chief's role will be reaching out to a community scarred by deep racial distrust.