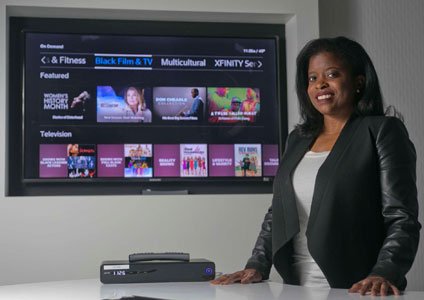 Keesha Boyd, executive director of multicultural products and consumer services for Comcast. Boyd is responsible for addressing Comcast’s overall business strategy with regards to African American consumers and to look for ways to enhance the company’s offering in ways that appeal to the black community. (Courtesy Photo/Comcast)

Keesha Boyd posted a photo of herself posing in front of her family’s television on her company’s website. She was just three-years-old when the photo was taken.

Boyd is grown up now and living a dream. Today, she is the executive director of Multicultural Products and Consumer Services at the cable giant, Comcast.

“I went from posing in front of the TV to having a job that literally impacts what people get to see on TV,” she said.

One of her tasks is to define Comcast’s African-American business strategy and find content that reflects the black community.

“My responsibility is for driving our overall business strategy for African-American consumers and to look for ways to enhance our offering in ways that better speak to this community and align with its consumption habits,” Boyd said.

Comcast’s research shows that African-American viewers are tech savvy media consumers and they watch more television than anyone.

“African-Americans are a very powerful viewing segment. Take the show ‘Empire’ as an example. When it premiered it broke all sorts of records week after week and it was because a large segment of the community was viewing the program,” Boyd said. “Because of that and shows like ‘Scandal’ and ‘How to get away with Murder’ and ‘Black-ish,’ you’re starting to see more African-Americans in lead roles on television, and consumption for these shows are at an all-time high.”

While African-American viewers watch a variety of general market content there is a strong preference for television shows featuring black or multi-cultural casts, according to a 2013 Nielsen African-American Consumer report.

Season one of “Empire” broke viewing records on Xfinity platforms, topping the Xfinity On Demand Top 20 list. A record-breaking one million viewed the show On Demand in the first week and the season finale drew nearly one million views On Demand within the first three days, another record, according to Nielsen.

“There are times you want to watch general-market content, and then there are times that you want to browse or dig deeply into content that speaks to black identity,” she said. “So we are making it easier to access that content.”

Making it easier is the new X1 voice-controlled remote and the “Black Film & TV” destination Comcast has created on Xfinity. With one click, individuals can be taken to popular movie offerings that list shows from leading black actors and directors.

Comcast has curated TV shows like “Scandal,” “Rosewood,” and “Empire.” Boyd is also working on a voice-command pattern where the user would only have to speak terms like “films by black directors” or “shows with black leading actors,” automatically taking them to those options.

“This community wants choice just like any other. We don’t just watch black content, we watch general market content as well,” Boyd said. “When you look at what’s being consumed in the black film and TV categories, it’s collections like our comedy, documentary, faith and family. From a TV perspective, we see a lot of heavy consumption of shows with a full black cast because as a viewing community, you like to follow your favorite actors and actresses.”

Comcast’s Black TV & Film folder on Xfinity on Demand currently offers more than 2,000 hours of programming curated by its team of experts who said they’re constantly adding and editing to provide the best of black entertainment with nearly 800 movies and more than 70 TV series.

The vast programming is probably enough to take Boyd back to when she was growing up.

As Boyd wrote, “Back in the day, my TV consumption consisted of ‘Sesame Street,’ ‘The Muppet Show,’ and the occasional ‘School House Rock.’”

“But soon came the time when I started to become aware of what I looked like— brown skin and fluffy hair— and I started to see past the puppets and look at the people.

“The more aware I was of myself, the more I looked for ‘me’ on TV. I remember noticing how Gordon and Susan on ‘Sesame Street’ looked like they could be in my family,” she said. “And I distinctly remember my eyes brightening up when I saw the little brown skinned cartoon boy in the ‘School House Rock’…. He was brown like me. I noticed. And it was awesome.”