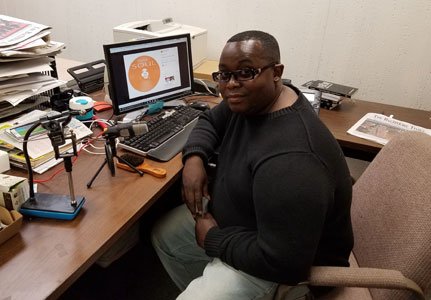 Baltimore Times columnist Phinesse Demps suffered a massive stroke on July 15, 2015. Now 10 months later, the 49-year-old receives rehabilitation services regularly and has finally returned to work. He has graduated from using a wheelchair to walking with a cane. (Photo: Dena Wane)

BALTIMORE — Recovering from a major stroke is no easy task. However, connecting with a rehabilitation facility can make that fight a lot less daunting.

When Baltimore Times columnist Phinesse Demps called the VA Maryland Health Care System, he discovered a committed team and several programs that have helped him on his road to recovery.

“I’m glad that I found them, that was really important,” said Demps, who suffered a life-threatening stroke in July 2015. 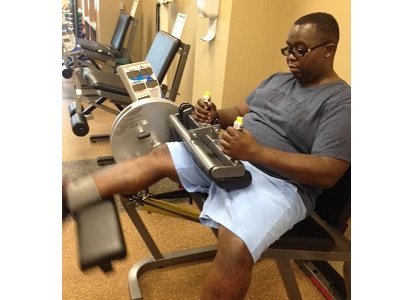 Physical therapy at the VA MERCE program is helping Phinesse Demps recover from a devastating stroke.

Demps’ initial call was answered by Joan McMorris-Marrow, a recruiter for the VA Maryland Exercise and Robotics Center of Excellence (MERCE). The program designs and tests new rehab therapies to improve physical function, fitness, and cardiovascular health for Veterans and all Americans with neurological disability conditions.

“I explained the program to him and he was very impressed,” said McMorris-Marrow who then forwarded Demps to Kate Fiske, a study exercise coordinator.

“We asked about medical history and date of stroke to make sure he’d be eligible,” Fiske said. “I told him all about the study in terms of testing and details and exercise training program to give him a chance to ask questions and schedule an appointment. That’s what we do with all of our patients.”

The objective of the VA’s MERCE program is to develop novel exercise and robotics therapies to improve lower and upper extremity motor function, cardiovascular fitness, and health for those with stroke and other neurological disability conditions.

Demps says his motor skills particularly his ability to walk, has vastly improved.

The MERCE program also performs mechanistic studies of brain plasticity, muscle biology, cardiovascular, and mental health. Still, the main objective of the program is to foster community outreach to improve the quality of life for stroke victims.

“We can accommodate most people,” said Fred Ivey, the co-principal investigator for the lower extremity strength training. “They have to be willing to undergo a screening process and have an open mind because we have diverse types of intervention; and each has its own merit.”

“No matter how far in the past you’ve had a stroke, we take people six months or even many years after,” Ryan said. “There is always time and there is always some help for people to gain more independence. Our studies are to aid someone who had a stroke and to give them a better quality of life.”

Currently, for Demps, rehab focuses on strengthening his lower extremity.

“When I spoke with him, I could tell he was really going to be an asset to us because he has such a positive outlook on life,” McMorris-Marrow said. “He told me that he went to the barbershop not far from where he works. He called a cab but the cab took so long so he walked and I thought that was awesome.”

Smith added that Demps remains motivated in his recovery.

“He always comes in with a smile on his face and pushes himself through the strength-training bouts which are challenging,” she said, noting that his rehab consists of gym exercises for 30 minutes, three days each week.

“In short, Demps is a dream patient because he has the drive and attitude. This is much about socializing as anything and we shouldn’t underestimate the importance of socializing, being around people who have high expectations because a lot of time people don’t challenge folks as much as they should,” Ivey said. “If you have the right personality type, which most people do that we encounter, it can really light a fire in people psychologically that can change their outlook and can drive them.”

It’s also important to note that the program is open to all, not just veterans, according to Ivey.