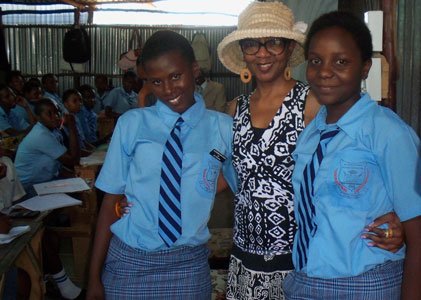 In the rural parts of the East African nation of Kenya, waterborne illness is a leading cause of death for young children, and untreated water is dangerous to people of all ages. Reportedly, many Kenyans have to make a daily choice: to use polluting woodstoves to purify their water or risk serious ailments. 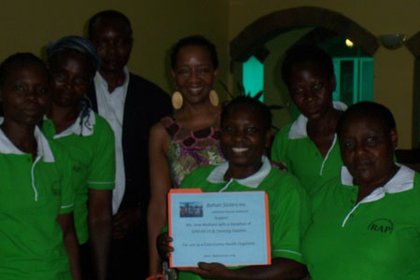 That is where Baltimore resident Vicki L. Jones stepped in. Jones, the founder and director of Bahari Sisters, a nonprofit that supports Kenyan women and children by providing funds for micro-businesses, health and nutrition initiatives and scholarships, is currently leading a campaign called “The Bahari HabiHut,” a water filtration project that will provide clean and running water.

“Our first annual fundraiser, “Sisters StateSide,” which was held at my church last September introduced the HabiHut project,” said Jones, who is also a costume designer, writer and producer with a bachelor’s in Clothing Design from Drexel University and a master’s from Johns Hopkins University.

Jones has worked in theater and video designing at the New Federal Theatre, Negro Ensemble Company and Billie Holiday Theatre in New York.

“The board is currently reviewing a lease for land in Nairobi, which may be a suitable location to place the structure,” Jones said, noting that Bahari has partnered with HabiHut, a Montana-based company that specializes in the design and manufacture of a rigid modular shelter that is secure and strong, and WaterStep, a Kentucky-based organization that provides safe water to communities in developing countries.

The project is still welcoming financial and medical partners to support the development in Kenya’s capital city.

Jones first visited Kenya on a mission trip in 2005 and she said it was a realization of a life-long dream.

The experience ignited a desire to work in Kenya on an on-going basis and, when that desire turned into passion, she took the next step to establish Bahari.

“I think the necessity to visit Africa began when I was in my 30s— thirty years ago,” Jones said. “I was living in New York at the time, working in theater. I started getting involved in social outreach activities and as a member of the House of the Lord Pentecostal in Brooklyn I was introduced to community issues and politics.”

“A few years later as a member of Riverside Church, I began to volunteer in their men’s shelter and I realize now that this was God introducing me to another side of myself.

“Several years later after I’d moved back to Baltimore, a co-worker asked me to donate to the travel expenses of her pastor for his mission trip to Nairobi. I did, telling her that I was in fact seeding into my future trip. I made my first trip a couple years later,” Jones said.

With little expectation and the unknown lying ahead, Jones recalled approaching Dulles Airport and thinking “is this really happening. I’m now on my way to Africa.”

Touching down in Africa proved surreal and Jones would meet women she described as living in dire situations and conditions— those who had no means of support for themselves or their children, but women who had “God-given joy.”