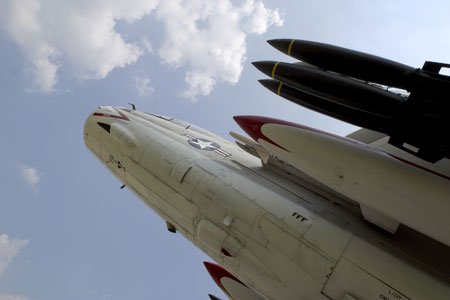 The U.S. Navy faces a new threat on the high seas: As potential adversaries spend lavishly to boost their maritime capabilities, we're outgunned for the first time in modern history. The Pentagon has wisely sought to rectify this imbalance with $2 billion to upgrade and increase to 4,000 the stockpile of Tomahawk anti-ship cruise missiles. The new investment will reestablish U.S. naval dominance over all potential comers.

Skeptics, though, are urging the Navy to abandon this plan and instead develop an expensive new weapons system.

America long dominated the high seas. During the Cold War, the Navy invested in the most cutting-edge anti-ship missiles on the globe. The Tomahawk reigned— a missile capable of reaching a target as far as 1,000 miles away. Hostile enemy ships didn't stand a chance— and they knew it. However, they were not happy about it. China has been increasing its military spending by 11 percent annually for the past two decades, especially focusing on sea power.

Russia, likewise, is posing a renewed threat, especially under Vladimir Putin. The Office of Naval Intelligence recently concluded that Putin seeks nothing less than a restoration of Soviet-era sea power over the next five years.

Iran, meanwhile, has spent years building up anti-ship missiles, with U.S. warships their unannounced targets. This year, the Iranian Revolutionary Guard detained American sailors whose boats strayed off course in the Persian Gulf, broadcasting video propaganda of the ordeal.

The Tomahawk is the only weapon that can restore American deterrence at sea. The GPS-powered system boasts 90 percent reliability. It's been used more than 2,000 times in combat, including in 2011, where it played a pivotal role in the NATO-led effort to depose Moammar Gadhafi in Libya. More recently, U.S. forces have fired Tomahawk missiles against ISIS. The latest Tomahawk can also receive in-flight target updates to reflect evolving available intelligence. Given the historical difficulty of identifying vessels and determining the level of threat they pose, this cutting-edge technology diminishes the risk of error.

That technology, paired with more precise tracker and seeker capabilities to focus on a moving target, means the latest iteration of the Tomahawk is a "game-changer," as the deputy defense secretary recently said. The missile is so versatile that "it can be used by practically our entire surface and submarine fleet."

Yet some defense analysts are pushing for a new weapons system. However, the major potential alternative to the Tomahawk under consideration— the Long-Range Anti-Ship Missile system (LRASM)— is vastly more expensive and offers only half the range of a Tomahawk. The LRASM can also only be fired from the air, meaning the Navy would need a nearby runway to use the missile. That's impractical for the western Pacific. Aircraft carriers could work but equipping a ship for such a weapon can cost hundreds of millions of dollars.

Considering that a timely upgrading of the Tomahawk will restore our dominance at sea, this push isn't wise. The Pentagon's Tomahawk proposal is an appropriate way to reestablish American dominance at sea. The most effective approach to preserving freedom of movement on the high seas is to reinforce our deterrent capabilities.

J. Michael Barrett, a former naval intelligence officer, Fulbright Scholar, and director of strategy at the White House, is currently the director of the Center for Homeland Security and Resilience.