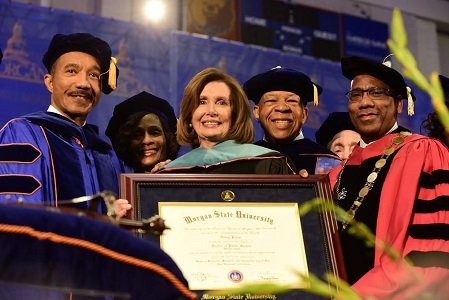 Congresswoman Nancy Pelosi was the keynote speaker at Morgan State University's 140th commencement ceremony. She received the honorary Doctor of Public Service degree for her many years of service and advocacy for economic stability, human and civil rights, fair wages and gender equity, and access to college. (Courtesy photo/Morgan State University)

BALTIMORE — Morgan State University (MSU) recently celebrated its 140th Commencement featuring House Democratic Leader Nancy Pelosi delivering the keynote address before thousands of students, alumni, family, friends and invited guests in the Talmadge Hill Field House on the campus. Pelosi joined MSU President David Wilson to congratulate the more than 800 undergraduate, graduate and honors degree recipients on the fulfillment of this phase in their lives – to become successful members of the Class of 2016.

“Today is an auspicious occasion for this university as we induct the newest members of this special family that we call Morgan alumni,” said Dr. Wilson. “This represents the culmination of years of hard work on the part of these students. They are now poised to leave this campus and proceed to make a difference in their communities and, indeed, the world.” 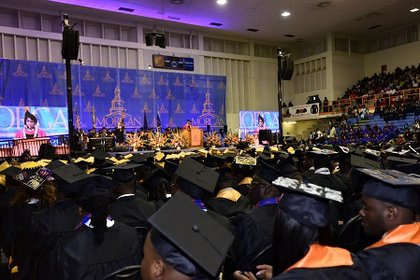 Nearly 850 students graduated from Morgan State University on May 21, 2016

Two individuals were singled out for special honors during the graduation ceremonies. Congresswoman Pelosi received the honorary Doctor of Public Service degree for her many years of service and advocacy for economic stability, human and civil rights, fair wages and gender equity, and access to college. And, former music executive and entrepreneur Kevin Liles, a Morgan alumnus, was awarded the honorary Doctor of Laws degree for committing his professional life to enabling others to live out their dreams and for devoting his personal life to philanthropy and community activism that promotes empowerment and education among the youth of Baltimore and beyond.

Included among the notable graduates from the Class of 2016 was Herman Brown, a political science major from Salisbury, Md., who was conditionally admitted to the University because of his SAT scores but went on to become one of the top performers in the College of Liberal Arts. Brown was accepted to five law schools and will attend the University of Baltimore’s School of Law on a full scholarship; Mariyah Bryant, a business administration major and Graves Honors student, who was a gubernatorial appointee to the Maryland Higher Education Commission, will enter the Finance Analyst Development Program with a position already promised at J-P-Morgan Chase; and Deneisha Gough, with her newly-acquired degree in journalism, has been invited to join Sinclair Broadcasting as a television news producer.

Also among Morgan’s scholars of note is Bernard Osher Scholarship recipient and working mother of seven, Walida Smith. As a member of the Class of 2016, Smith who graduated with a 3.8 GPA, achieved the rare feat of earning both her B.S. in Architecture and Environmental Design (December 2015) and her Master's in Landscape Architecture (May 2016) in the same academic year. Smith currently works as a full-time consultant with non-profit organization the Skinner Leader Institute and plans to take her Master’s thesis to the national level working with churches and community partners to use their properties to revitalize the surrounding neighborhoods. She also has two of her children presently enrolled at Morgan State University.

A posthumous degree was awarded to Mr. Raymond Kitson-Walters, who died after earning his doctorate in Business Administration. Mrs. Donnett Kitson-Walters accepted the degree on her late husband’s behalf.