Is this the world's most Instagrammed coffee? 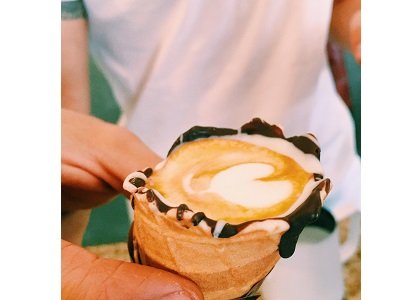 Dayne Levinrad is the barista behind the Coffee In a Cone craze sweeping South Africa. The Johannesburg-based business worked with Facebook Africa to market the product on social media platforms. (CNN)

(CNN) — Is this the world's most Instagrammed coffee?

That's the claim made by Dayne Levinrad, the barista behind the Coffee In a Cone craze sweeping South Africa.

Since launching in January, nearly 1 million images with the #coffeeinacone hashtag have been liked on the picture-sharing social media site.

But while the idea is simple -- serve coffee in an ice cream cone lined with chocolate -- Levinrad says the science behind his creation is not.

When Johannesburg-born Levinrad returned to his home city after four years working as a coffee consultant in Brazil, Australia and Los Angeles, he wanted to do something different.

"Johannesburg had a competitive coffee sector, but it wasn't third wave, specific-sector coffee yet," he says. "From my research in Australia, I knew that's the way the market was heading."

People love ice cream, coffee and chocolate, says the former digital marketing executive, so he decided to serve all three at once.

Simply pouring coffee into a chocolate-lined wafer cone, however, didn't work -- "the wafer was too thin."

"We bought our own machine and started rolling our own wafer cones, using different flours, but the chocolate still melted.

"We couldn't have any leakage."

In the end, Levinrad and used four different types of chocolate compounds to coat the cone, each hardened by varying percentages of cacao content.

"Now we've got the whole thing under patent," he says, "it's a very arduous process."

Coffee drinkers have 10 minutes to drink the coffee before the four layers melt.

Coffee In a Cone owes it success to Levinrad understanding of social media.

First, he created the #coffeeinacone hashtag.

"We used the cone as a way to become an Instagrammable product. When people come in they take a selfie and tag #coffeeinacone," he says.

Levinand also employed someone to man a WhatsApp line dedicated to taking orders for take outs and deliveries of the product.

His marketing strategy caught the eye of Aviv Weil, of Creative Shop Facebook, Africa -- who had spotted the creation on social media.

"This was the most innovative coffee idea I had seen in years," Weil tells CNN. He reached out to Levinrad and offered assistance through Creative Shop -- Facebook's program for helping small businesses -- with "everything from brand strategy to creative concepts, targeting insights".

Weil guided Levinrad in how to build a creative marketing and advertising ecosystem using the Facebook, Instagram, WhatsApp and Messenger platforms, leveraging each in a unique way.

"We then used a heatmap trending application to monitor where the tag has traveled to," Levinrad says. "It's gone all over the world."