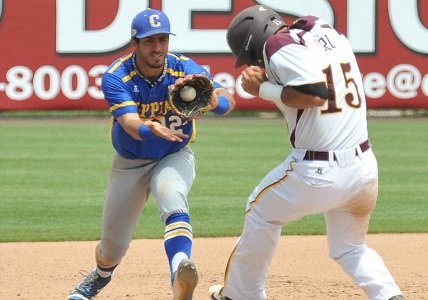 SALISBURY, Md. — Coppin State fell in extra innings to Norfolk State 7-6 and were eliminated from the 2016 MEAC Baseball Tournament on Monday, May 23rd at Perdue Stadium. Junior infielder Bryant Miranda led the Eagles with three hits, two runs scored, and an RBI as Coppin State outhit the Spartans (12-8).

Miranda finished 3-for-6 at the plate while seniors Colin Dower, George Dragon, and Darien Percell all finished with two hits each. Both Percell and Dower strung in two RBIs apiece while Dragon scored one run. Freshman relief pitcher Andrew O'Dwyer was issued the lost (1-7) after closing the game going 4.1 innings, striking out four, and walking three.

The Eagles got off to a slow start with five walks in the first inning giving Norfolk State an early advantage. Coppin State's first run came on a double to left field by infielder Colin Dower. Dower registered his 101st career hit in the blue and gold sending freshman catcher Malik White home (3-1). White got on base with a double to left center field in the second inning.

In the third inning, Coppin came up with two hits tying the action (3-3). Miranda singled up the middle to lead the inning off followed by an RBI single to right field by Dragon. Dragon advanced to second on a fielding error by the Spartans then proceeded to third with Miranda scoring the second run of the game. Next Percell tied it up with a sacrifice fly to center field scoring Dragon.

Two singles in the fifth inning by Norfolk State along with a throwing error by Coppin gave the Spartans a two run lead (5-3). With the momentum, NSU added on an additional run in the next inning (6-3).

Trailing the No. 1 seed of the MEAC Northern Division heading into the seventh inning, Coppin State used a pair of hits by Dower and Miranda to cut the Spartans lead to two runs. Dower led off the seventh with a single to shortstop and then outran the throw to first. He advanced to second on a throwing error by NSU and was later brought home on an RBI single up the middle by Miranda (6-4).

With their backs against the wall and in dramatic fashion Coppin State used a pair of hits and a passed ball to tie the game at 6-6 in the ninth inning. Norfolk State struck out the first two Eagles and then the Miranda sparked the late inning rally. He singled through the left side and advanced to second base on a walk by Dragon.

Next, Percell RBI doubled to right field sending Miranda home and also advancing pinch runner Joshua Smith to third base (6-5). Shortly after Smith crossed home plate on a passed ball tying the game for the Eagles with their sixth run of the afternoon (6-6).

Relief pitcher A. O'Dwyer and the Coppin State defense held off NSU in the first two extra innings. O'Dwyer had three strikeouts and surrendered one hit in that span. The heartbreaker came in the bottom of the 12th inning with the bases loaded full of Spartans. Their leadoff batter doubled to right center field followed by a second base runner reaching on a fielder's choice. Next, CSU intentionally walked a batter loading the bases leading to an RBI sacrifice fly out to right field for the game winning run. Norfolk State held off the Eagles in extra innings 7-6 eliminating Coppin State from the 2016 MEAC Baseball Tournament.

Coppin State outhit the Spartans 12-8 and also forced four fielding errors. The Eagles season ends with an overall record of 14-38.