Crash demonstration highlights need for seat belt use in all seats

Safety Officials to Passengers:“Don’t Be Back Seat Killers” 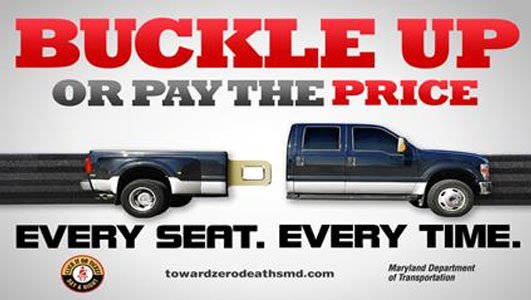 Overlooking an isolated stretch of runway at Martin State Airport, officials from the Maryland Department of Transportation, National Highway Traffic Safety Administration, Baltimore County Police and safety advocates witnessed a sudden and violent impact between two cars on Tuesday, May 24, 2016. The T-bone crash simulation effectively showed the devastating consequences of unbelted occupants during a typical car crash and demonstrated the need to wear seat belts in every seat during every ride. Officials specifically focused on the need for backseat passengers to wear seat belts to avoid becoming human projectiles in a crash and killing others in the vehicle, including those who did the right thing by buckling up.

“Our message is simple: buckle up in every seat, every time, day and night,” said Maryland Transportation Secretary Pete K. Rahn. “The most effective way to save your life— and the lives of others— is to wear your seat belt.”

“Seat belts prevent ejection during rollovers, and they stop back seat passengers from becoming projectiles during a crash,” said Dr. Beth Baker, Region 3 Administrator for the National Highway Traffic Safety Administration. “No matter how short or far you’re traveling, buckle up.”

In 2015, Maryland’s seat belt usage rate was 93 percent, an increase from the 2014 rate of 92.1 percent. Despite the increase, the number of traffic fatalities in Maryland went from 443 in 2014, the lowest number since 1948, to a preliminary number of 521 in 2015. Thirty six percent of people who died in Maryland motor vehicle crashes last year were unbelted. Not wearing a seat belt continued to be a leading cause of death on Maryland roads last year. If Maryland could reach a 100 percent seat belt usage, about 54 more lives could be saved each year.

“As a police officer, there is nothing worse than notifying a family that they have lost a loved one and knowing that the loss could have been prevented if they had simply buckled their seat belt,” stated Baltimore County Police Chief James W. Johnson.

“As drivers and as passengers, we all have choices to make each and every time we get into a vehicle,” said Suzanne Elzey, founder of the CruiseSafe Foundation, a nonprofit driving safety organization. “Whether you realize it or not, the choices you make at that time, will impact hundreds of people for the rest of their lives. So make safe, smart choices - buckle up, drive the speed limit and avoid distractions— as a driver or a passenger."

Suzanne founded CruiseSafe after a horrific crash claimed the lives of her teenage son and his three best friends on Kent Island in April of 2013. Suzanne shared her personal story and spoke about the choices people make as drivers and passengers, and the long-term impact those choices have on family, friends and communities.

The crash demonstration marks the start of the national Click It or Ticket media campaign aimed at increasing seat belt use across Maryland and the country. The campaign features a television spot, which was designed specifically to address the issue of unbelted back seat occupants. The spot, which was developed using federal highway safety funding, can be seen here. The campaign also features radio advertisements and digital media, as well as grassroots partnerships with local radio stations and Uber.

Buckling up in every seat is the law in Maryland. Every person who is not buckled faces the possibility of an $83 ticket. Along with not wearing seat belts, officials highlighted areas that have historically been leading causes of deaths on Maryland’s roads, including: impaired driving; speeding; distracted driving; and not using crosswalks.