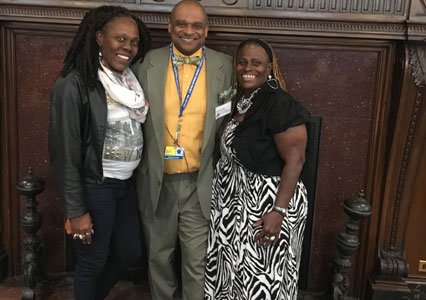 Joseph Cooke (middle), senior outreach worker at the Blalock 319 Hepatitis Clinic at Johns Hopkins Hospital with two patients at the National Hepatitis Testing Day on Thursday, May 19, 2016. Johns Hopkins officials also celebrated the curing of 1,000 individuals who had hepatitis C at the event. (Courtesy Photo)

In Greater Baltimore, Hepatitis C affects African Americans more than any other group, according to Joseph Cooke, a senior outreach worker at the Blalock 319 Hepatitis Clinic at Johns Hopkins Hospital.

If left untreated, hepatitis C can lead to liver cancer and cirrhosis which is why treatment and awareness should be a priority in local communities where conversations should be held in churches, barber shops and other local gathering spots, Cooke said.

“It is now a very exciting time in hepatitis C treatment and new oral regimens have extremely high cure rates,” he said. “However, we still face challenges as individuals must first know that they are infected and then be linked to hepatitis C care.”

A report from the Centers for Disease Control and Prevention that was highlighted earlier this month by the U.S. National Library of Medicine revealed that the number of hepatitis C-linked deaths in the United States reached a record high in 2014, and the virus now kills more Americans than any other infectious disease.

There were 19,659 hepatitis C-related deaths in 2014, according to preliminary data from the CDC.

“Why are so many Americans dying of this preventable, curable disease? Once hepatitis C testing and treatment are as routine as they are for high cholesterol and colon cancer, we will see people living the long, healthy lives they deserve,” Dr. Jonathan Mermin said in an agency news release.

If not diagnosed and treated, people with hepatitis C are at increased risk for liver cancer and other life-threatening diseases. They may also unknowingly infect others.

The new CDC study found that the number of hepatitis C-related deaths in 2013 exceeded the combined number of deaths from 60 other infectious diseases, including HIV and tuberculosis.

The numbers might even be higher because the new statistics are based on data from death certificates, which often underreport hepatitis C.

Most cases of hepatitis C are among baby boomers— those born between 1945 and 1965, according to the National Library of Medicine. Many were infected during medical procedures such as injections and blood transfusions when these procedures were not as safe as they are now. Many hepatitis C-infected “boomers” may even have lived with the disease for many years without knowing it, according to the report.

On Thursday, May 19, 2016, Johns Hopkins held a National Hepatitis Testing Day at the William H. Welch Medical Library where providers, clinic staff and patients networked and where free testing was offered.

Johns Hopkins officials also celebrated the curing of 1,000 individuals who had hepatitis C.

“We are seeing a huge surge in youth because of the rise in drug use and tattoos,” said Nancy Haselhuhn, a nurse practitioner at Johns Hopkins. Normally, blood work that could detect the virus isn’t ordered for young people and insurance companies usually won’t authorize such procedures unless there’s already a serious health problem, Haselhuhn said.

“Often it takes several years to realize damage but once the liver shows scarring you’re now at risk for cirrhosis. I tell people that if you’re feeling sick, it’s probably late, your liver is already infected,” she said, adding that some symptoms could include nausea, vomiting and the yellowing of the eyes.

The most common complaint is feeling tired, Haselhuhn said. “A lot of people are quick to blame getting older for feeling tired,” she said.