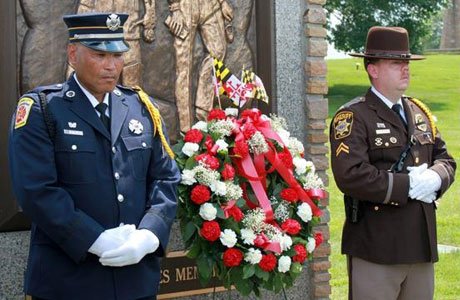 The public is invited to Dulaney Valley Memorial Gardens' annual Memorial Day celebration, which salutes the men and women of the armed forces who have paid the highest price in defense of the United States of America on Monday, May 30, 2016 at 10 a.m.

The public is invited to Dulaney Valley Memorial Gardens' annual Memorial Day celebration, which salutes the men and women of the armed forces who have paid the highest price in defense of the United States of America on Monday, May 30, 2016 at 10 a.m. The traditional patriotic ceremony will feature a slate of local participants and honor those fighting the battles of today, as well as to those who gave their lives in Korea, Vietnam and World War II.

Airman 1st Class Nathaniel H. McDavitt of Severna Park, Marylnad, who was killed on April 15, 2016 in Jordan by the Islamic State, will be honored on Memorial Day 2017.

Dulaney Valley Memorial Gardens, Circle of the Immortals is located at

·US Marine Corps will lay wreaths at the WWII/Korean War Memorial, Children of Liberty Memorial

·Military memorabilia, vehicles and uniforms courtesy of Butch Maisel and the Boys’ Latin Center for Military History (slated to open in Fall, 2016)

The Memorial Day Ceremony is held in Dulaney Valley’s Circle of Immortals, an area dedicated in 1967 and reserved for Marylanders killed in action. Twenty-six men who died in Vietnam are buried within the Circle. The area is also home to the official Baltimore County World War II/Korean War Memorial, dedicated in 1998; and The Children of Liberty Memorial, which was added to the Circle in 1990 and is dedicated to Maryland servicemen and women who died at the hands of terrorists. It includes a plaque dedicated to the seven Maryland servicemen who lost their lives in the 1991 Liberation of Kuwait, the names of the three Maryland servicemen killed in 2000 aboard the USS Cole and the names of the servicemen killed in the September 11, 2001 attack on the Pentagon.

The annual Memorial Day ceremony at Dulaney Valley Memorial Gardens is a legacy of the former owners, the Armiger Family, who felt the public was losing sight of the meaning of Memorial Day. Since purchasing the cemetery in 2007, John O. Mitchell III and John O. (Jack) Mitchell IV, owners of the Mitchell-Wiedefeld Funeral Home, Inc. in Towson, MD have been committed to continuing the tradition of honoring those who serve our country and they welcome the community to pay tribute to these dedicated men and women.