Young entrepreneur 'sneakin' up the ladder of success 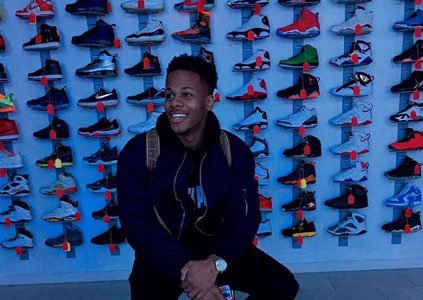 Chase Reed, 18 of Sneaker Pawn located in New York City. Reed says Sneaker Pawn is the only store of its kind in the world. (Courtesy Photo)

Chase Reed, 18, recalled when he borrowed money from his father and handed over a pair of his tennis shoes.

“I have always loved tennis,” said Reed. “I needed to borrow some money from my father, and gave him a pair of my tennis shoes. The tennis shoes were an incentive for me to pay the money back so I could get my sneakers back. At the time, we were working on opening up a sneaker store, and thinking about unique ideas and names that would make it different.”

He added, “We were watching a program on television one day about pawn shops. We said, 'we should open up a sneaker pawn shop.'”

Thus Sneaker Pawn was born. Sneaker Pawn is located at 292 Lenox Avenue (125th Street) in New York, NY. Reed, and his father Troy Reed run the store, which he says is the first sneaker pawnshop in the world to his knowledge. Sneaker Pawn buys and sells new and used sneakers, consigns and pawns sneakers. Their stock includes exclusive new releases, limited edition and retro sneakers.

The father and son opened the store in 2014. At the time, the younger Reed was just 16.

He added, “We try to give people as many options as possible whether they need money and want to sell their sneakers, or want to buy sneakers. Business has been good. When I think back on when we started, things happened very fast. We were able to do this in less than two years.”

Reed is a native New Yorker and just turned 18 in February. He has been featured in numerous publications including The New York Post, Kids Sports Illustrated online; The Root, Dime, Sportswear International and Source magazines. He has appeared on CBS World News; Bloomberg TV; CNBC; Teen Nick; and The Steve Harvey Show.

“A variety of different people come to Sneaker Pawn to purchase tennis,” said Reed. “A lot of tourists who saw me on The Steve Harvey Show also come here to buy tennis. We also attract people from all over New York of every generation, every race, and all ages looking for all kinds of tennis shoes. Some want retro styles [and] others want new styles. Some people come in wanting to buy the updated version of their sneakers.”

Reed is the recipient of the Black Wall Street award and recently was listed on Forbes’ 2015 ‘30 under 30’ and Crain's ‘20 under 20.’ As an ambitious, young entrepreneur and trendsetter, he continues to explore new opportunities to expand his brand globally in the sneaker and fashion industries. He shared this advice to aspiring entrepreneurs.

“You have to be consistent, and do something that you like doing. If you don’t like doing something, you’re not going to put forth as much effort. I also advise people to open doors of opportunity. You never know what doors will open for the next opportunity. We did a media interview, and that opportunity turned into a hundred other interviews. Take all opportunities that are positive and will benefit you.”

“Right now, we are working on opening another store and launching an online store,” he said. “I want to be as successful as possible and to own as much as possible. I also want to supply jobs and employ as many people as possible. Right now, we employ about 10 people, but I would like to see that turn into 1,000 people and then 10,000 people in New York, and all across the country. I want to supply jobs, and a way for people to like what they are doing.”