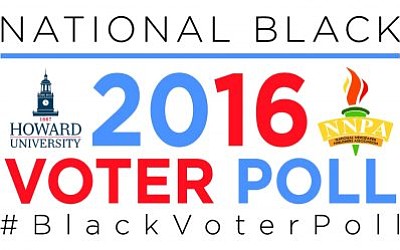 The HU/NNPA national polling center, located on the campus of Howard University, made over 21,200 telephone calls across the United States from October 23, 2016 to October 30, 2016.

Howard University faculty and students from multiple departments and disciplines including economics, political science, sociology, communications and media studies, were represented in the coordinated effort.

“This multi-disciplinary team has drawn on its expertise to develop a comprehensive polling instrument designed to assess the opinions of Black Americans on the presidential candidates and other important issues facing the Black community and the nation,” said Terri Adams-Fuller, the associate dean of the College of Arts and Sciences at Howard University.

• 94% of those polled plan to vote in the upcoming election

Of those who plan to vote:

“As a result of this poll, candidates and those who will be successful in occupying the White House and controlling Congress will know the prioritized issues and nuanced concerns of the Black community,” said Rubin Patterson, the chairman of the Department of Sociology and Anthropology. “We hope that these findings will shape their policy and legislative agendas starting next year.”

Benjamin F. Chavis, Jr., the president and CEO of the NNPA said that the NNPA-HU National Black Voter Poll is timely and very significant for Black America.

“The fact that 94 percent of Black Americans polled indicated that they intend to vote on November 8, or have already voted during the early voting period is indicative of the importance of the right to vote in Black America at a time when there has been inaccurate speculation about how Blacks in United States view the 2016 national elections,” said Chavis.

Chavis added: “This poll provides clarity on the national issues and the candidates for President of the United States. The poll verifies that Hillary Clinton is the overwhelming favorite of Black American voters over Donald Trump.”

Founded in 1867, Howard University is a private, research university that is comprised of 13 schools and colleges. Students pursue studies in more than 120 areas leading to undergraduate, graduate and professional degrees. The University operates with a commitment to Excellence in Truth and Service and has produced three Rhodes Scholars, nine Truman Scholars, two Marshall Scholars, over 60 Fulbright Scholars and 22 Pickering Fellows. Howard also produces more on-campus African-American Ph.D. recipients than any other university in the United States. For more information on Howard University visit www.howard.edu.