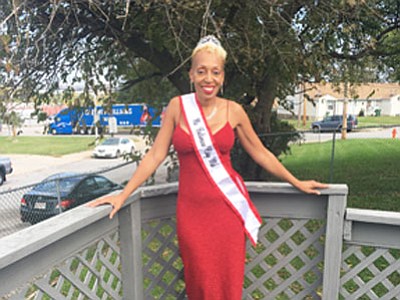 DaVeeda White is currently competing in the Ms. Entrepreneur/Ms. YoungPreneur Pageant 2017, a new pageant being held in Maryland that encourages entrepreneurs to network and share business ideas. Courtesy Photo

BALTIMORE — DaVeeda White is an entrepreneur who says she is strengthened by transforming her personal health challenges into a viable service that allows others to see obtainable possibilities.

Born and raised in Baltimore, White graduated from Western High School and received an associate’s degree with a concentration in health from Baltimore City Community College.

She went on to graduate from Sojourner-Douglas College before earning a bachelor of science degree from Coppin State University.

White, who is CEO and founder of the nonprofit DaVeeda’s Quest 4 Quality Days (DQ4QD) and owner of 2 Van Transportation Companies as well as a travel agency, has battled multiple sclerosis since 1999 and she was diagnosed with breast cancer in 2013.

“The breast cancer diagnosis was just another challenge,” White said, noting that she draws strength from her mother, sisters and daughter, as well as the Bible. “I approach every challenge with the mindset that I can and will be triumphant. It’s this way because of the health challenges I’ve faced for over 15 years and [am] still battling.”

“My family is my foundation that supports, loves and cares for me continuously, without missing a beat. I stay strong for them as well as they are strong for me.”

White is currently competing in the Ms. Entrepreneur/Ms. YoungPreneur Pageant 2017, a new pageant being held in Maryland that encourages entrepreneurs to network and share business ideas.

“My interest for the pageant wasn’t for the typical beauty contest but actually your brains,” White said. “Having the entrepreneur component got me hooked. I am honored to represent Baltimore City because I am a product of the neighborhoods where many people aren’t afforded opportunities for growth [and] live below the poverty line. It’s

important to see and actually know someone who grew up, received all of her education in the public school system and worked while starting businesses for the community.”

Despite her health setbacks, White has managed to thrive despite many recent reports that show that black women are more likely than whites to have the most complications when it comes to breast cancer.

“I lowered my risk of future breast cancer episodes by opting to have a double mastectomy. I came to this decision because after the diagnosis, I didn’t want to experience this again,” she said, noting that she also underwent genetic testing for her family members to gather information about her cancer cells.

White has also focused on her nonprofit, DQ4QD, which she has hosted small events raising capital to assist with health fairs and women’s shelters.

“I’m still praying for that national sponsorship which will allow me to expand my outreach campaign to service more people,” White said. “My goal is to provide tote bags that contain items that are helpful during chemotherapy sessions and other appointments.”

It was during her chemotherapy sessions when she was given a bag with a blanket from ‘Ribbons of Comfort,’ which she said was very useful. However, she needed other items that were not included in the bag.

“So I came up with ‘Grab your Tote and Go to Chemo.’ These tote bags would include a throw, a fleece blanket, fuzzy slippers, socks, bandana, hat, journal, notebook, crossword puzzles, Sudoku, pens, hand wipes, sanitizer, lip balm and a mirror,” she said. “But, anything is possible. These items were essential to me during the long daily chemo treatments.”

White says she is uplifted and inspired by all women battling cancer, including their loved ones. She also says that she is grateful for organizations like Shay Sharpe, which grants wishes to woman under 40 with terminal breast cancer and Kita Williams of The Atikal Foundation whose rawbeauty.org has collaborated with her organization.

“I was a featured model in The 2014 Raw Beauty Calendar and I am currently a Raw Beauty Ambassador. I assist at Health events for breast cancer sharing my experiences and Raw Beauty allows you to have a voice,” she said.

For more information about White’s nonprofit and the scheduled a fundraiser on Friday, November 11, 2016, visit https://dq4qd.com/.