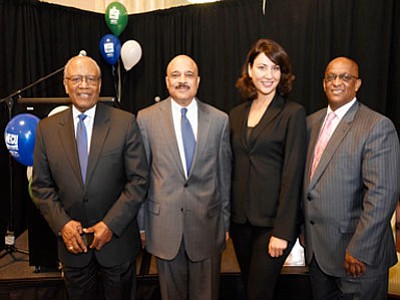 Founded in 1936, MECU is Baltimore’s largest credit union with $1.2 billion in assets and approximately 113,000 members. MECU has built a solid reputation by offering a wide array of financial services to anyone who lives, works, worships or attends school in Baltimore at 11 offices throughout Baltimore City and Baltimore County and online.

The financial institution’s longevity is rooted in its dedicated services to small business and ties to the community. For the past four years, the MECU Foundation has awarded local non-profit organizations with cash grants up to $1000 to produce empowerment events, such as festivals, back-to-school rallies, block parties and health fairs to help strengthen Baltimore’s neighborhoods. In 2015, 116 organizations were recipients of the MECU Neighborhood Events Grant.

“I think part of our fundamental core and our DNA is how we integrate ourselves as a community financial institution into the local community and how we’ve integrated with many nonprofits,” said John Hamilton, MECU’s president and CEO.

MECU recently presented $35,000, raised from the 12th Annual MECU Charity Cup Tournament in September, to the CollegeBound Foundation, nine Baltimore partner schools and Credit Union for Kids to be used to purchase school supplies and meet the academic needs of students.

“In partnership with the MECU Foundation, MECU has taken a vested interest in our Baltimore schools,” said Deborah Sharpe, Board Member, MECU Foundation in a press release. “We are honored to provide financial support and applaud the many MECU employees who generously volunteer their time to help our students succeed.”

During the celebration, MECU members, some since the 1950s, participated in activities ranging from $80 raffles to snapping candid photos at a pop-up photo booth.

“We had someone who’s been a member for 58 years, a member from an Organization called ‘Loving Arms’ who talked about her relationship and what it meant to her organization and how we supported them in their mission,” Hamilton said. “Then, there was a six-year-old who gave me a sign that she drew and she said she wanted to give me something special. She gave me a card that said ‘I love MECU.’ For me to have someone who has been a member for 58 years and someone from the nonprofit sector and someone who is just six, you have in a nutshell that we’re not just focused on our current membership but also on new generations.”

MECU’s anniversary celebration was held at its 7 East Redwood St. head-quarters where longtime members spoke about the role the credit union has played in their lives.

“MECU has been a prominent part of my career,” said Delores S. Harvey, an associate professor at Coppin State University and an educator for 57 years. “MECU was there for the important times in my life.”

Hamilton noted that he sees any challenges the credit union might face as opportunities.

“I tend to look at us and look at what opportunities we have. We’re a very large organization with $1.2 billion in assets and 113,000 members,” Hamilton said. “I look at our opportunities and see that MECU is poised for additional growth in the community and we have mission of serving the citizens of Baltimore. We are proud of our commitment to underserved communities and, the next 80 years, I see us as an organization that’ll continue to give back to its members through dividends and interest rates which, since 1981, we’ve already given back approximately $80 million to our members and we’ll continue to do that while being engaged with and being a community partner whose walking hand in hand with our community.”