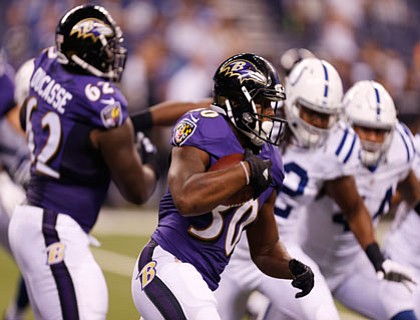 Baltimore Ravens rookie running back Kenneth Dixon carries the football in the game against the Indianapolis Colts during the 2016 preseason. Courtesy Photo/NFL.com

BALTIMORE — The Baltimore Ravens are coming off the bye week having lost four straight games after starting the season with a three-game winning streak. Their record now sits at three wins and four losses.

It has been a tough season for the Ravens so far. They had high hopes after landing free agents Eric Weddle and Mike Wallace to fill their need for safety and vertical threat at receiver. Unfortunately, the offense could not find a way to run the football.

coordinator. John Harbaugh struck gold before the 2014 season when Gary Kubiak was hired to oversee the offense.

The Ravens offense set franchise records under Kubiak but he didn’t return in 2015 after accepting the head coach position with the Denver Broncos. Trestman was named the replacement and the rushing offense has not been the same.

The rushing game was expected to improve Marty Mornhinweg took over as the offensive coordinator after Trestman was fired. Unfortunately, there have been injuries along the offensive line that has hindered progress.

“It certainly didn’t help. We have to get the run game going, and having our offensive line," Harbaugh said. "We already have two young guys in there as it is— a rookie left tackle [Ronnie Stanley] and a rookie left guard [Alex Lewis]— who we feel very good about with both of those guys in their spots.

"Like I said, I am appreciative of what Alex was able to do at left tackle for those three games [or] four games that he played left tackle. But it is going to be better to have our full complement of guys in there healthy. It should help us in really every area, including the run game.”

Harbaugh was able to sense a renewed energy in the players when they returned from the break on Monday.

“I think the guys are just ready to go," Harbaugh said on Monday. "They were excited to get back [and] go to work. We had a good work day today, and they were ready to go.”

The Ravens have back-to-back games against AFC North opponents in the coming weeks. Their first task will be going against their archrivals, the Pittsburgh Steelers this week. They will play the Cleveland Browns in week nine.

It is far too early to pack it in for the season. No team coached by Harbaugh would ever do such a thing. Harbaugh pointed out what the immediate goal is during a recent press conference.

“You take everything into account. We have nine games left," Harbaugh explained. "We’re basically one game down in our division, playing the team that’s ahead of us right now. Our goal is certainly going to be to win the division. That’s in front of us. It’s up to us. We’re going to play those teams. No matter what our record would be in that range of what it could be right now, we have to beat the teams in our division to make anything of it anyway. That’s what we’re looking to do.”

A win at home against the Steelers on Sunday, November 6, 2016, will be the perfect way to jumpstart the second half of the season.