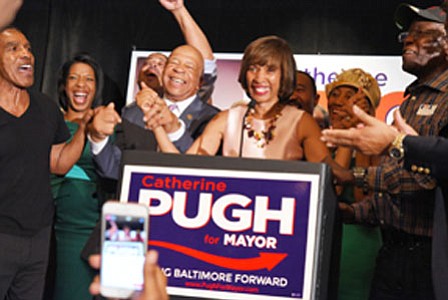 BALTIMORE — After blazing a trail to election victory on Tuesday, Baltimore Mayor-elect Catherine Pugh said she’s ready to begin “lighting up our city.”

“We want to create communities where people can walk out of their neighborhoods to places that they can enjoy,” Pugh said in a post-election interview with WBAL.

Pugh, a Morgan State graduate and the Majority Leader in her third term as Maryland State Senator, earned about 60 percent of the vote on Tuesday to easily defeat a write-in campaign by former Mayor Sheila Dixon and two other opponents – Republican Alan Walden and Green Party candidate Joshua Harris.

Pugh, 66, holds an MBA from Morgan State University and has received qualification from the University of California as an Economic Development Specialist.

She has been recognized for her leadership and commitment to diversity and inclusion by numerous organizations both locally and nationally, including: the United States Small Business Advocate of the Year; the National Association of Securities Professionals Joyce Johnson Award; the NAACP Legislator of the Year; the Mental Health Associations Legislator of the Year; and the African Methodist Episcopal Church’s Living Legacy Award, according to her biography.

As mayor, she’ll have support from Governor Larry Hogan and others in her quest to accomplish her agenda at City Hall, Pugh said.

“The governor and I have learned how to work with each other. I also understand the role of our Council,” she said. “I want to empower them to do their job.”

Pugh’s plan for education includes restoring governance of schools to Baltimore City; increase contributions to the city school budget from 20 percent to 35 percent over the next four years; increase the availability of Judy Centers and Universal Pre-K; explore student remediation programs; and to employ year-round literacy programs for youth and adults.

“Improving our education system has to be a top priority,” Pugh said.

“Schools play a major role in companies deciding where to move or expand. The quality of a school system is also a factor when families decide where to raise their children,” she said.

Further, her plans for jobs and economic development include the establishment of accountability and transparency for all city generated economic development programs; establish a micro grant program; develop small businesses to anchor healthy neighborhoods; string small, eclectic neighborhood oriented shops together to create scale; leverage light rail and other public transportation to create thriving new neighborhood economies; and through the Mayor’s Office of Employment Development, Pugh plans to train the under employed and connect them with relevant job opportunities.

“The goal of our economic development and jobs effort is to be inclusive and equitable as we create more jobs for the people who live in our city and erase the barriers that currently exist,” she said.

“We will partner with our private sector and philanthropic community to enhance opportunities for year-round job opportunities for our youth. We will match our training programs to meet the needs of employers. We will become a more business friendly city as we eliminate unnecessary red tape in the permits and licensing process,” Pugh said.

“We will increase investment in our own residents as we expand retail corridors, develop and re-develop crumbling neighborhoods. We will provide incentives to attract scale developments, and 21st century growing industries and manufacturing opportunities. We will build on the programs in place that offer incentives for companies and corporations to locate in Baltimore. We will grow our city,” she said.

First elected to the Baltimore City Council in 1999, Pugh ironically lost in her bid for Council president to Dixon in 2003. She remained on the City Council until 2004 before being appointed to an open seat in the Maryland House of Delegates. In 2006, Pugh won a seat in the State Senate, and until now, has sat on the finance committee and served as the Majority Leader in the State Senate.

“This can be the greatest city in America,” Pugh said. “We want Baltimore to be known for all of its greatness, not just some of the negative things that have happened or have impacted our city.”