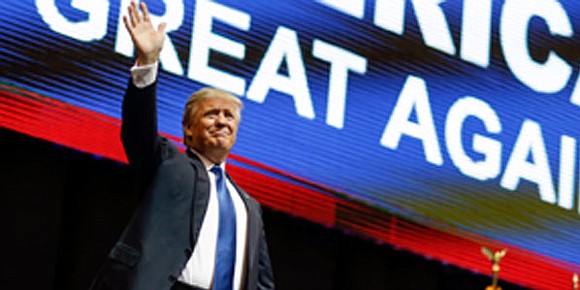 BALTIMORE — In the morning after what Democrats and their supporters – and even some Republicans – deemed a nightmare which resulted in the election to the Oval Office of bombastic, woman and minority-bashing Donald Trump, Hillary Clinton began her concession speech with two of the most sobering words in the American dictionary.

“I’m sorry,” she said from her New York campaign office.

She thought she’d make history and shatter the proverbial glass ceiling and become the first woman president in history.

Instead, Trump, with all his off-the-cuff rhetoric, open disdain for immigrants, lack of respect for woman, and reckless comments about African Americans, will succeed Barack Obama and become the 45th president of the United States in January.

“Last night, I congratulated Donald Trump and offered to work with him on behalf of our country. I hope that he will be a successful president for all Americans,” Clinton said on Wednesday, still stunned by her late-night defeat.

“Donald Trump is going to be our president. We owe him an open mind and a chance to lead,” she said, admitting that it was far from the outcome she and her constituency expected when they went to the polls on Tuesday.

“This is not the outcome that we wanted and we worked so hard for, and I am sorry that we did not win this election,” Clinton said.

While she lost the election, in part, because of her inability to seal such historically blue states as Pennsylvania, Wisconsin and Michigan, the state of Maryland and the city of Baltimore remained true blue.

Not only did Maryland voters back Clinton, but they elected Catherine Pugh, a Morgan State graduate and the majority leader in her third term as Maryland state senator, to succeed Stephanie Rawlings-Blake as Baltimore’s 50th mayor on Tuesday.

Last year, Rawlings-Blake announced that she would not seek re-election, touching off a primary race between Pugh and former mayor Sheila Dixon.

Pugh defeated Dixon in the April primary, but Dixon waged a write-in campaign in the general election and coming up short--again.

Maryland voters also elected Rep. Chris Van Hollen to serve as the state’s next U.S. senator, defeating a challenge by Republican Kathy Szeliga in what amounted to a 60 to 36 percent landslide victory in unofficial polling results.

Van Hollen, who supported an increase in the minimum wage and equal pay for women, will succeed the retiring Sen. Barbara Mikulski, who’s served in Congress since the ‘70s, making her the longest-serving woman in the history of Congress.

“Let’s be dreamers and doers together,” Van Hollen told his supporters who were gathered at his headquarters in Silver Spring on Tuesday.

For Clinton, CNN reported that the former First Lady and Secretary of State’s concession speech also marked what could be the final act on the national stage for the Clinton double act--the political partnership between her and former President Bill Clinton that seemed poised for a remarkable comeback, 16 years after they left the White House.

Campaign staffers spoke throughout Clinton’s presidential bid of the extreme pressure many of them felt in facing Trump, whom Clinton argued was temperamentally and intellectually unfit for the presidency and to oversee the U.S nuclear arsenal.

Now she is under pressure to call on a nation, split almost exactly down the middle, to unite behind the next president, CNN said.

“I know we have still not shattered that highest and hardest glass ceiling, but someday, someone will, and hopefully sooner than we might think right now,” Clinton said.

“To all the women and especially the young women who put their faith in this campaign and in me, I want you to know that nothing has made me prouder than to be your champion,” she said.

“And to all the little girls who are watching this, never doubt that you are valuable and powerful and deserving of every chance and opportunity in the world to pursue and to achieve your own dreams.”