'Orange Is the New Black' actress: Immigrants 'are here to stay' 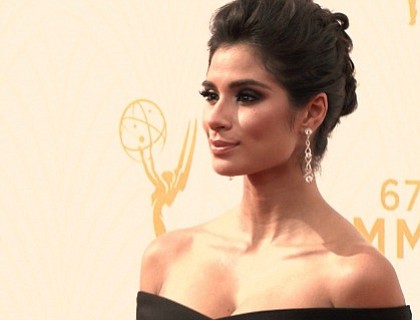 Diane Guerrero on the red carpet of the 67th Emmy Awards in Los Angeles, September 20, 2015. POOL

"Today, Latino, immigrant and Muslim children are scared—and with good reason. Our nation will soon be led by a man who ran a campaign based on fear and hatred against immigrants, communities of color, Muslims, women, the disabled, and many more," she wrote in her essay, which was published on Vice's Broadly blog.

Guerrero, who is known for her roles in the hit Netflix show "Orange Is the New Black," and the CW Network's "Jane the Virgin," noted that Trump's campaign has "emboldened anti-immigration sentiments across the country."

"My message to the nativists is this: We are not going anywhere. We are here to stay and we are ready to fight back. We may be afraid, but we are united and we are tough," Guerrero wrote.

In a 2014 CNN interview, the actress revealed that she is the U.S.-born child of undocumented immigrants. She was only 14 years old when she came home from school one day and found out her parents had been detained, she said during the interview. In her essay Friday, she wrote about the pain she endured after her parents had been deported.

"Afterwards, I suffered a deep, years-long heartache that affected my emotional, financial, and scholastic well-being. No child should ever have to experience that, especially at the hands of a broken immigration system," she wrote.

One of the Trump administration's first priorities is to "move criminal aliens out" and deport anyone who is caught entering the U.S. without proper documentation. Trump has also said he would repeal two of Obama's executive orders that provides temporary protection from deportation to hundreds of thousands of undocumented immigrants.

One of the orders, called Deferred Action for Childhood Arrivals (DACA), was put in place six years ago and has helped thousands of young people who were brought into this country as children come out from the shadows and get valid driver's license, enroll in college and legally secure jobs. Known as DREAMers, these children have grown up in the United States for the majority of their lives, and feel American in nearly every way, with the exception that they lack documentation.

Now those who have registered through the DACA program fear they may be deported under a Trump presidency.

"The so-called DREAMers...do not know their futures because Trump has vowed to revoke their permits. Those who were preparing to apply for DACA for the first time are now being advised to wait, so that their names are not flagged by the incoming Trump administration," wrote Guerrero.

She recalled the bravery undocumented people have shown in their fight to gain the same rights as U.S. citizens.

"It was these DREAMers who came out of the shadows six years ago and challenged politicians to give them and their parents relief from deportation'" she wrote. "DACA was created as a result."

She asked readers to show that same bravery now and let their voices be heard by representatives in the House and Senate and on a local level.

"We will share our stories, educate our children and communities about our efforts to build a better future, we will show people how to apply for citizenship, and we will mobilize," she wrote. "Let's not be afraid to demand a clean break from the deportation-focused policies. Let's also demand fast action on common sense immigration reform to fix the current, outdated system."

Her essay ended on a hopeful note.

"Our cause is great, and we have come too far to give up now."