East Coast Gospel Music Summit is ‘off the charts’ 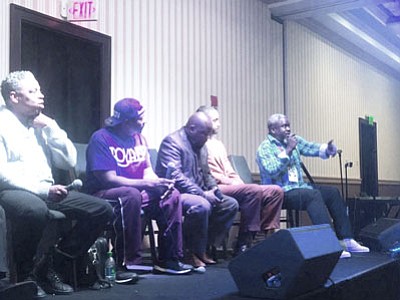 BALTIMORE — Some of gospel music’s biggest recording artists including Vashawn Mitchell, Troy Sneed, Gary Hines of Sounds of Blackness, Joe Pace, and Ted Winn were in town for the East Coast Gospel Music & Arts Summit. This was the fourth year of the event, which took place October 28, 2016 through Sunday October 30, 2016.

Entertainment executives judged the artist showcases and offered advice on various panels. The event took place at the Sheraton BWI Airport in Linthicum, Md., and concluded with a concert at Johns Hopkins Hospital’s Turner Auditorium in Baltimore.

“This event gave aspiring recording artists, actors, musicians and visual artists an opportunity to learn various aspects of the business side of the entertainment world,” said Reverend Michaels.

“It was also a chance for them to showcase their talents and to network with people who may aid them in fulfilling their professional goals. We also had a panel of radio professionals and record label reps who evaluated them on the spot and gave them advice on perfecting their gifts.”

After serving in the United States Air Force and studying at the Broadcast Institute of Maryland, Rev. Michaels began his broadcasting career at various radio stations in the Maryland area in the early 1980s. He joined WCAO Heaven 600 AM in 1991 as an announcer and became program director in 1994, a position he still holds in addition to being the morning drive host from 6 a.m. – 10 a.m.

Pastor of the Manifest Wonders Christian Center in Baltimore, Micheals hosts the weekly television program “Grace & Glory” which airs on WMAR Channel 2. In 2005, the Stellar Award winner was inducted into the Radio Hall of Fame in Canton, Ohio.

“The main thing was to lay the seeds of a legacy of giving back,” said Rev. Michaels. “Career wise, I have been blessed with a 38-year career in the area of broadcasting. During that time, I have seen people with dreams and aspirations in area of music not see those desires fulfilled because they were ill-prepared for what they wanted to accomplish.

“I had to be the bearer of not-so-pleasant news by telling them their music was not radio worthy,” he added. “I decided that instead of being a stumbling block, I would become a stepping-stone by finding a way to help. This was also in-line with my desire to give back. Out of that was birthed the idea of doing the summit.”

According to Rev. Michaels, approximately 300 participated in the event at the Sheraton.

“We had several panel discussions which included the state of the industry,” he said. “We also had several musical guests who performed. We wanted folks to experience varying degree of success. Two things determine how far you will go in the entertainment industry— your ability and whom you know. If you have talent and make good connections, you will get there. The Bible says your gifts will make room for you.”

Renowned choirmaster J.J. Hairston of Youthful Praise hosted the concert at Turner Auditorium, which featured choirs from all over the country and drew a capacity crowd of nearly 800.

“This event has become a staple in the industry,” said Rev. Michaels. “It was off the charts. This was our biggest summit yet.”