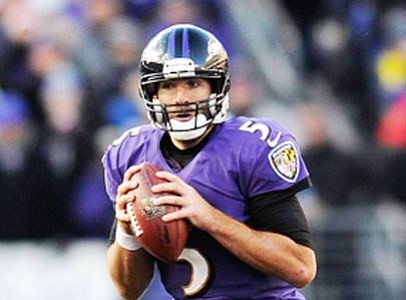 Baltimore Ravens quarterback Joe Flacco drops back to make a pass during a regular-season game at M&T Bank Stadium in 2016. Courtesy Photo/NFL.com

BALTIMORE — Baltimore Ravens quarterback Joe Flacco continues to work his way back into form after tearing multiple knee ligaments last season. The ninth-year quarterback has been a steady presence for the Ravens since taking over in 2008.

The veteran quarterback has also completed 237 of his 379 pass attempts, placing him at a 62.5 percent completion rate. When Ravens head coach John Harbaugh was asked if he thought Flacco should be more cautious with the football earlier this week, he expressed confidence in Flacco's ability to work it out.

“I think that quarterbacks have to work that out for themselves," Harbaugh said. “You could start whipping the ball around there haphazardly, and some good things would happen, and some bad things would happen. It’s definitely an art. It’s definitely a science. It’s a very difficult position to play. It happens fast. Good decision-making under fire is just something that you see when you see it. Joe is definitely his own harshest critic. He looks at those things very hard and studies them very hard. Nobody wants to play better quarterback for the Baltimore Ravens than Joe Flacco."

Harbaugh cited the hard work that Flacco puts in to be successful. He also acknowledged that there are some things to clean up which include protecting the football.

Baltimore's rushing attack struggled to find consistency despite new offensive coordinator Marty Mornhinweg's focus on running the football. As a result, the passing game is forced to pick up the slack.

Mornhinweg decided to utilize the hurry-up offense to jumpstart the offense against the Browns in the Ravens last game.

"You get the defense on their heels, and that’s what it’s all about," Flacco said after the Browns game last week. "That doesn’t always come in the form of two-minute. I mean, there’s ways to do that out of the huddle, too, and just hitting them with runs, hitting them with play-action, drop-back, screens, stuff like that, and today we just got into a little rhythm, two-minute wise.”

The emergence of young players such as 2015 first round pick Breshad Perriman and wide receiver turned tight end Darren Waller has helped Flacco and the passing game. Both Perriman and Waller scored touchdowns against the Browns.

Flacco has always shown a preference for throwing the ball to his tight ends. He is confident that he has found a new weapon in Waller.

“Darren’s a big guy that runs well, has great hands," Flacco said. "He’s a really talented guy. So, I think getting him involved and showing himself that he can do, too. Yeah, he’s another guy that, once he gets out there and gets more playing experience, he’ll start to really understand things."

The Ravens offense will need to be as effective as possible this week as they head to Dallas to face a Cowboys team that is firing on all cylinders. Rookies Dak Prescott and Ezekiel Elliott are both deserving of being included in MVP along with Rookie of the Year consideration.

The Cowboys are yet to beat the Ravens in the four games they have played against each other. If Flacco and the offense have it their way, the record will be 5 - 0 when they leave AT&T Stadium in Dallas on Sunday.