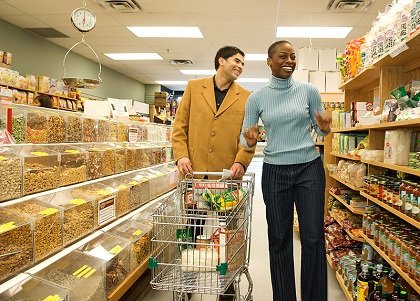 (CNN) — As you're poring over the holiday ads from major retailers to make your wish list, environmental activists want you to consider more than price when you shop.

"Use your purchasing power to drive positive change in the marketplace," said Mike Schade of Safer Chemicals Healthy Families, a group devoted to reducing toxic chemical footprints. "Ask major retailers to get tough on manufacturers and use their influence to rid the marketplace of toxic chemicals."

"When out shopping, no one should have to worry that the shampoo, lotions, cleaners, clothing, shoes, or home electronics contain toxic ingredients that could harm their family's health," said Mike Belliveau, executive director of the Environmental Health Strategy Center, another group working to reduce toxic chemicals in the marketplace. "Where would you rather shop, at a retailer that scores a B or the retailer with a red F for failure to ensure their safety of their products?"

To help consumers make those decisions, a new report from the coalition grades retailers for the first time on how well they are reducing toxic chemicals in the products they sell. Called "Who's Minding the Store" the report graded companies on a scale of zero to 130 points by looking at 13 different categories of action retailers could take, including chemical safety screening, ingredient disclosure, efforts to find safer alternatives and reporting the amount of "chemicals of high concern" the company has reduced or eliminated.

Those chemicals include heavy metals such as lead, mercury and arsenic, toxic flame retardants and endocrine disruptors such as parabens, BPA and formaldehyde.

The good news, said Schade, is that two top retailers, Walmart and Target, received a B grade for making "meaningful progress" over the last three years toward safer chemicals in the products they sell. In fact, both companies expanded their list of problematic chemicals to over 2,000.

"This summer Walmart reported that their suppliers had reduced high priority chemicals by 23 million pounds," said Schade, "and Target added cosmetics to their policy for the first time and improved suppliers' transparency practices, especially in regard to fragrance."

Unfortunately, says Schade, the average grade among the 11 retailers was a D+.

"There are some serious laggers," he said, "showing there is a need for significant improvement in the marketplace to protect consumers."

The online retailer Amazon received the worst score, only 7.5 points out of 130. Costco didn't fare much better, scoring only 9.5 points. Schade said all of the companies were shown the report in advance, and given the chance to respond.

"Neither Costco or Amazon formally responded to our communications," said Schade. "We think this is deeply concerning. Amazon, for example, is set to become the largest retailer of apparel and electronics over the next year, and increasingly rolling out new product lines. They need to catch up."

Albertsons, a supermarket chain, also received an F in the report, scoring only 12.5 points out of 130. The company told CNN that the Safer Chemicals, Healthy Families report "offers an incomplete view of the work we do to offer our customers products and merchandise that put safety first."

"In fact, in May 2016, we were recognized by the Environmental Protection Agency for our efforts toward labeling our private label products which meet the EPA's Safer Choice requirements," said Chris Wilcox, vice president of communications. "We are committed to continuing these efforts across the products we manufacture and those we sell in our stores, and to giving our customers the information they need to make purchasing choices that are right for them.'

Amazon did not respond to CNN's request for comment. Costco said it was not able to provide a response.

Home Depot and Kroger did not respond to a request for comment. Corporate public relations at Lowe's said: "Safer Chemicals shared a copy of their study with us. We continue to have conversations with this group and others to learn more about their concerns."

Walgreens told CNN it is working with their English partner Walgreens Boots Alliance, which has "already developed an advanced program in retailing, manufacturing and chemical sustainability. We also are in continuous dialogue with multiple external parties including laboratories, NGO's and other retailers to improve the transparency of product ingredients and chemicals of concern."

"It's not all doom and gloom," said Schade. "Some companies are making significant progress. For example, CVS Health has signed the Chemical Footprint Project, the first pharmacy to do so, and has pledged to tell the public by 2017 about its list of restricted chemicals. And Best Buy told us they are working on a safer chemicals policy and restricted substance list."

CVS Health (53 points) and Best Buy (41 points) both fell into the C category.

Why should so much of the responsibility for change rest on the shoulders of giant retailers? Because they are on the front line of consumer discontent and they have a fundamental moral responsibility, argues Schade.

"If you think about it, most people don't buy products directly from the manufacturer," he said. "It is retailers that have the relationships. The eleven retailers we evaluated have combined sales of over one trillion dollars, a market power that can transform the toxic chemical economy."

Schade also pointed to the economic fallout that can affect companies when consumers find out that a company has been selling toxic products. Take for example the case of Lumber Liquidators, whose stock collapsed after CNN's Anderson Cooper reported, on the CBS News show "60 Minutes," that the flooring sold by the company contained high levels of the cancer-causing chemical formaldehyde. The company's CEO later resigned.

"And there's a United Nations report that documents the various financial and business risks associated with toxic chemicals -- including over $138 million in fines against Walmart, CVS and other retailers," said Schade.

So what can a consumer do if they believe their favorite retailer doesn't have a satisfactory grade?

"We have an online action page," said Schade. "There you can both thank those companies who are doing well, and encourage those who are not to become a leader and not a lagger."